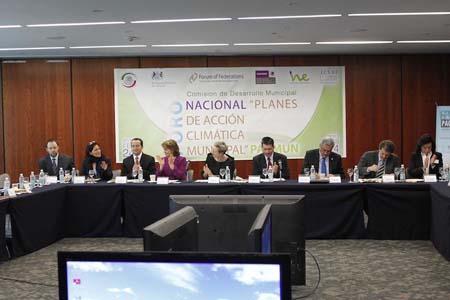 Members during the Forum on Municipal Climate Change Action Plans in Mexico.

Mexico’s Senate Commission on Local Government, in partnership with the Forum of Federations, the Embassy of the United Kingdom in Mexico, and Local Governments for Sustainability (ICLEI), held a National Forum on Municipal Climate Change Action Plans in Mexico. The objective of the February 24, 2012, workshop was to discuss policies that Mexico’s local governments can implement in order to mitigate and adapt to climate change. In addition to specific local government policies that will be introduced, the workshop also included an information session by the National Institute of Ecology, on specific federal funding and capacity building support that is being made available to state and municipal governments in Mexico.

Mexico’s federal government has prioritized environmental protection and climate change planning over the past five years, with a strategic focus on social education and behavior change among the citizenry. To acheive these goals, there has been significant engagement with state and local governments to collaborate in the design and implementation of these programs. As well, municipalities have been encouraged to work together, through ICLEI-Mexico, to develop their own sustainability policies in the areas of land use policy, energy use, green buildings, etc.

The workshop was opened by Senator Ramon Galindo, President of the Senate Commission on Local Government, who noted that a prosperous and sustainable Mexico can only occur with prosperous and sustainable municipalities. Senior orders of government have an important role in supporting local governments to implement sustainable local economic development plans, particularly through technical assistance and national financing of local development projects.

United Kingdom Ambassador to Mexico, Judith Anne McGregor, welcomed participants to the workshop, noting the value of sharing experiences and policy tools between the two countries in affecting real behavioural change at the local level. Ambassador McGregor emphasized her nation’s commitment to assisting with climate change planning in Mexico, noting that the U.K. will increase both technical and financial support to a greater number of local governments in Mexico, with the twin goals of mitigating the impacts of climate change, and reducing the future generation of greenhouse gases.

Linda Schade, Director of the Black Carbon Reduction Council at the Climate Institute (Washington D.C), made a presentation on the tools that local governments can employ in order to reduce black carbon emissions. Black carbon, together with methane, has been identified as the short-lived climate change forcer offering the best opportunity for fast-acting climate change mitigation. Generated from wood burning cook stoves, diesel transportation and brick kilns, among other activities, the reduction of these short-lived forcers can be achieved through existing methods that provide public health and economic benefits. In the case of wood-burning cook stoves, for example, it is estimated that indoor air pollution causes 1.8 million deaths annually, with women and children comprising 85% of the related deaths. Therefore, black carbon reduction can be seen as both a climate change and public health issue. Local governments can play an important role in reducing black carbon and methane emissions, through upgrading the particulate filters on municipal diesel transport vehicles, improving the emissions standards on brick kilns in their jurisdictions, methane capture from landfills, and supporting the distribution and use of non wood-burning cook stoves. Ms. Schade concluded by noting that, in addition to the environmental and public health benefits, all of these actions will result in reduced costs and greater efficiency for both governments and industry.

The workshop was attended by over 100 participants from the federal, state and local governments, as well as experts from the academic and NGO communities. There was an extensive question and answer period in which local government officials received clarification on specific programs and policies that could be adapted for use in their communities. For example, the United Nations has partnered with the Global Alliance for Clean Cookstoves to make the appliances available for a heavily discounted price, and local governments can purchase and distribute them to citizens, as well as provide training for their use.