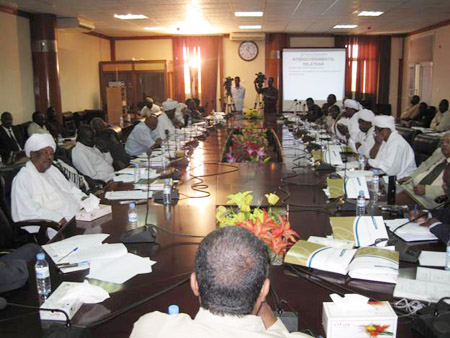 Sudanese officials discuss implementation and reform of wealth- and power-sharing institutions in Sudan.

The Forum organized and delivered a learning event on the theory and practice of federalism for representatives of Sudan’s Council of States – the upper house of the parliament of Sudan. The event was held on Aug. 4, 2010.

Each of the country’s 25 state legislatures (indirectly) elected two representatives in the April 2010 elections who are to serve six year terms in the State Council, in accordance with the Interim Constitution of Sudan,

The training began with a session on comparative federalism theory and practice, presented by Bertus De Villiers of South Africa, a legal practitioner and member of the State Administrative Tribunal of Western Australia. He highlighted the oversight and representation functions that upper legislative bodies are entrusted with as key institutions in federal systems.

Mr de Villiers was involved in the South African constitutional negotiations process in 1996.

He was joined by Yakubu Aliyu, a public finance economist who recently served as the lead technical adviser on economic policy reforms to Nigeria’s former Minister of Finance, Mansour Mukhtar. Mr. Aliyu provided an overview of the broad outlines of fiscal federalism and practical experience in Nigeria.

The discussions that followed dealt with specific challenges and opportunities stemming from the implementation and reform of wealth- and power-sharing institutions in Sudan, as the country engages in important debate in the lead up to and beyond the January 2011 referendum on self-determination.

The event was held in Omdurman, Khartoum’s historic sister city. It was covered by several international and local media, including Al-Jazeera, Egypt News Television, Sudan TV, and several Sudanese newspapers.

The seminar is a component of the Forum’s Federal Governance and Peace program, which seeks to engage a broad community of Sudanese political stakeholders on the role that federalism can play in advancing peace, stability, and development in Sudan. The project is funded by the Canadian Department of Foreign Affairs and International Trade.