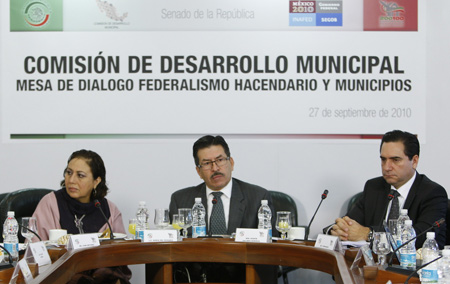 Mexico’s National Institute for Federalism and the Forum delivered a workshop on fiscal federalism in Mexico City on Sept. 27, 2010.

The focus of the workshop was to examine the fiscal arrangements of state and local governments in Mexico.

This event brought together 20 practitioners from Mexico’s federal, state and local governments.

The Forum supported the workshop through the participation of Juan Antonio Zapata, a fiscal federalism expert from Argentina. Dr. Zapata, who had also participated in a previous workshop on March 25, 2010, during which he provided comments on a draft document on municipal own-source revenue generation in Mexico.

The objective of this second and final meeting of Mexican practitioners was to improve the text of this draft document which was prepared by Mexico’s Interior Ministry, and will serve as an important reference document for upcoming legislative debates on fiscal reform proposals.

Workshop discussions focused on the formal role of municipal governments in the fiscal coordination structure, and how this role could be expanded. It was agreed that, given the significant differences in the size and level of development of Mexico’s local governments, any reform of taxation authority and administrative responsibility would be applied asymmetrically.

As the current redistribution system in Mexico provides little incentive for local governments to stimulate economic growth, practitioners noted that there could be a positive impact from allowing municipal governments to receive a percentage of the value-added tax collected from their jurisdiction.

Participants also agreed on the need to improve the system of land title holdings, as it creates obstacles to buying and selling land, as well as for municipal property tax collection.