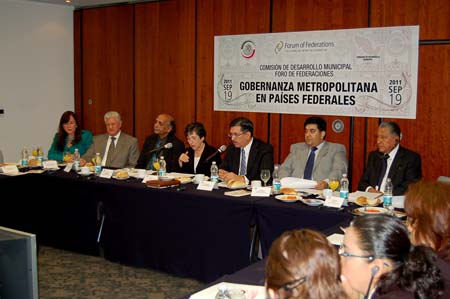 The Forum of Federations provided an international dimension to workshop deliberations, through the participation of Enid Slack, Director of the International Institute of Municipal Finance and Governance, University of Toronto, Canada; and Ash Narain Roy, Director of the Institute of Social Sciences, New Delhi, India. Rupak Chattopadhyay, President and CEO, Forum of Federations, opened the presentations by speaking of the Forum of Federations’ thematic program of local and metropolitan governance, which to date has focused on both capital cities and metropolitan governance in federal countries. Both of these areas have been the subject of comparative study by the Forum, overseen by Dr. Enid Slack, revealing many similarities in the challenges faced by federations to ensure good governance in areas of defined political boundaries with undefined and mobile constituencies.

Dr. Slack presented a comparative analysis of metropolitan areas in nine federal countries, noting that there are four basic models of metropolitan government structure (single tier fragmented, single tier consolidated, two tier, and voluntary cooperation). While all models contain advantages and disadvantages, Dr. Slack submits that fiscal autonomy is an equally important factor to ensure that services are delivered efficiently and costs are shared fairly. As well, a regional government structure can overcome a perceived distance from citizens by engaging constituents through community or neighborhood councils, and encouraging participatory democracy.

Dr. Ash Narain Roy delivered a presentation on metropolitan governance in India, observing that service delivery, particularly water and public transportation, remains uncoordinated, and continues to be one of the greatest challenges for local governments in India. There are several reasons for the lack of coordination, first among which is a neglect of infrastructure by state governments. A fragmentation of responsibility between institutions (state, local, regional authorities) has made it difficult to coordinate and assign responsibility to the provision of services. Also, while local governments are heavily dependent on fiscal transfers from other orders of government, they do not adequately pursue the collection of their own source revenues, such as property taxes. Dr. Roy notes that while India is underperforming in many areas of metropolitan governance, it has made incredible strides in including previously marginalized voices in local decision making, through a quota system that sets asides local government seats for female and indigenous political representatives.