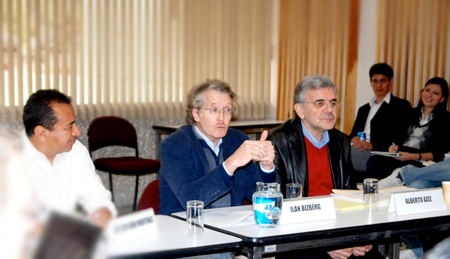 Twenty participants from civil society organizations, universities and institutes in Mexico recently gathered to discuss their country’s recent experiences with federalism during a time of political reform.

During the last 25 years, Mexico’s political system went through a process of democratic transition which has resulted, among other things, in the revival of its federal system. But despite being a federal country since 1824, Mexico still faces the challenge of reinventing relations between its sub-national units and the central government in the country’s new democratic context.

In their wide-ranging discussions, participants did not agree upon the level of democratization of the Mexico’s political system and the role played by political parties and civil society organizations at the subnational levels.

Many participants thought that the local and state political arenas are more authoritarian than the national arena. Other participants disagreed and underlined the capacity of state and local governments to innovate. Mexican municipalities are recognized in the constitution and receive a share of their funding from the federal budget, although they otherwise come under the general administration of the states.

There were sharply opposing views expressed about the role of federalism in Mexico’s recent transition from the authoritarian one-party rule of the Partido Revolucionario Institucional or PRI, to a more democratic and competitive three-party system.

At the outset of Mexico’s transition process, federalism was a means to greater democratize the political system. However federalism is also perceived by some in Mexico as an instrument for the maintenance of authoritarian hold-outs against the wave of democratization.

Participants did agree there are no blueprints for the ideal federal model.