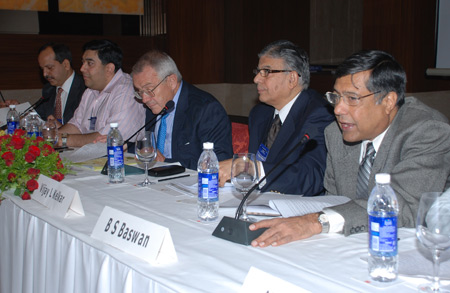 Experts from 10 countries recently met in New Delhi to discuss the core elements of intergovernmental relations (IGR), a process that is imperative for the effective functioning of federal countries.

The meeting was the culmination of Theme Eight of the Forum of Federations Global Dialogue program. The experts, known as country coordinators, had previously held national roundtables in their respective countries.

The coordinators met in Delhi to deliberate over three major cross-cutting issues of IGR:

â€¢ The impact of IGR on the democratic experience of citizen, community and society;
â€¢ The effectiveness of IGR in policy making and implementation; and
â€¢ The role of informal and formal interactions in the federalization of the government.

The participants agreed that there is no "one best way” of practicing intergovernmental relations but instead a rainbow of patterns varies among countries, issues and regions.

They also generally agreed that:

One session was exclusively dedicated to Indian practitioners, who analyzed the effectiveness of existing structures and process of intergovernmental relations with reference to some unique Indian experiences, such as constitutionally mandated local self-governments and fiscally weak bigger provinces. IGR in India has been characterized by informality and flexibility.

Participants discussed the European Union (EU), which is a form of federation that is highly reliant on sound IGR. The EU case brings out the fact that IGR can be adapted to the changing needs of a federal system.

The coordinators also noted that constituent units are emerging as a means of accommodating diversities. Also, the complexities of modern life have led to the overlapping of intergovernmental jurisdictions.