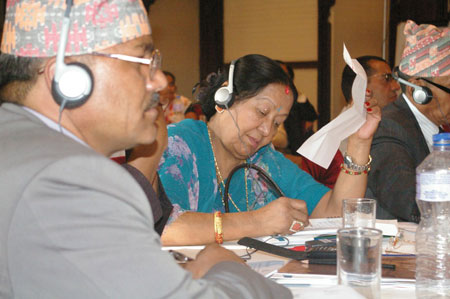 A participant listens to presentations at a recent Forum workshop in Nepal.

The Forum of Federations, in collaboration with the Nepal Constitution Foundation, recently held a two-day workshop in Kathmandu titled: Transition to Federalism in Nepal: Lessons from Comparative Transition Experiences.

Nepal is undergoing a major transition in its political and economic makeup, which will eventually lead to its transformation into a democratic and federal country. While the new Nepali constitution is still being drafted, and a number of important decisions need to be made, the transition towards a federal system of governance seems to be well accepted among the various parties and stakeholders.

Several important initiatives have been undertaken to initiate the discussion and preparation for the implementation of the new constitution and the transition to federalism, yet more analysis and debate needs to take place for the stakeholders to better understand and prepare for a timely and effective transition.

To assist in this process, the Forum of Federations commissioned three international studies looking at the experiences of Spain, South Africa and Ethiopia, all of which recently underwent transition from a unitary to a federal system of governance.

The Forum partnered with the Nepal Constitution Foundation and also commissioned a discussion paper to analyze the three studies, outline their relevance to the situation in Nepal and provide input to the discussion on the transition to federalism. These studies were the primary focus and laid the foundation for the workshop.

The October 27 and 28, 2010 workshop aimed at contributing to the ongoing discussion on the transition to federalism in Nepal, including a formulation of a possible "roadmap” for the transition, by providing participants with a better understanding of urgent issues and possible solutions in light of relevant international experiences.

The first day of the workshop focused on the discussion of constitution-making in Nepal and identifying key transitional issues which must be addressed in the new constitution. Day two examined international comparative experiences on transition to a federal system of government and discussed a possible framework for the transition in Nepal, including political and technical preconditions for the implementation of a successful transitional plan.

The workshop was delivered and facilitated by a team of international and national experts, including Dr. Carles Viver of Spain, Mr. Hassen Ebrahim of South Africa, Mr. Hashim Tewfik of Ethiopia, and Dr. Bipin Adhikari of the Constitution Foundation who presented a discussion paper titled Roadmap for Transition to Federalism in Nepal: Lessons from Comparative International Experiences.

The workshop sessions were chaired and moderated by senior political leaders from all major parties, and commented by national experts. The Forum’s President, Mr. George Anderson, and Vice-President, Dr. Werner Thut made opening and closing remarks at the workshop. Almost 90 participants, including policy-makers, government officials, national experts, academics, and representatives of international and donor agencies, which are directly engaged in, or support, the completion and implementation of the new Constitution, attended the workshop.

Speaking at the closing session of the workshop, Mr. Nilambar Acharya, Chairman of the Constitutional Committee of Nepal’s Constituent Assembly, said that the workshop was a timely initiative that helped draw the attention of the Nepali decision-makers to important issues and challenges they need to keep in mind, while going through a process of transformation.

He emphasized that Nepal "cannot go back from its commitment to democracy, inclusiveness and federalism, but can only go ahead.”

Mr. Acharya concluded by saying that important lessons can be learned from other federal countries on how a federal arrangement can bring people together.

The workshop was part of the Forum’s three-year program in Nepal, funded by the Swiss Agency for Development and Cooperation (SDC), which aims to assist the country in building its capacity to develop and implement a federal democratic system