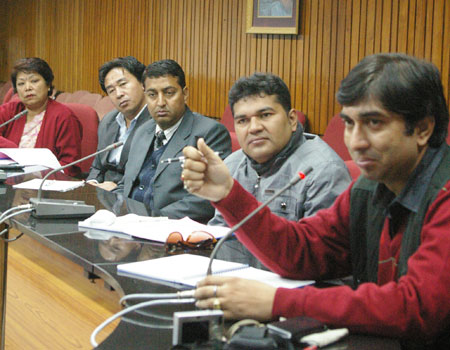 Forum workshop participants from Nepal discuss Indian federalism during a visit to the Lal Bahadur Shastri National Academy of Administration in Mussoorie – a city approximately 250 km north of New Delhi that lies in the foothills of the Himalayas. The group met with Mr. P. K. Gera, Joint Director of the Academy, as part of a two-week Indian federalism course in November/December 2010.

The workshop, held from November 22 to December 3, 2010, was organized by the Forum of Federations in collaboration with the Indian Institute of Public Administration (IIPA), an institution established in 1954 by the then Indian Prime Minister Jawaharlal Nehru to facilitate training and research on matters relating to public administration.

The event increased the participants’ general knowledge about federalism issues, the process of drafting and amending a constitution and the practice of federalism in India.

The workshop also helped participants further develop their thinking about the relevance and adaptability of federalism in Nepal, as the country is drafting a new federal democratic constitution and preparing to implement a new federal system.

The workshop included interactive sessions with Indian academics and government officials, visits to government institutions and a field visit to the newly-established Indian state of Uttarakhand where participants met with the former chairman of the Nagar Panchayat (a form of urban political unit in India comparable to a municipality) and Councilor Mr. Pradeep Rana, who shared his experience on governance, functions and the election of the local bodies in India. Others who shard their views were Manmohan Sharma, Shanti Thakru, Munesh Kumar and other members of the Nagar Panchayat. They also spoke about their experience of working with local bodies in India, dealing with such issues as taxation and income.

In their presentations, participants discussed the genesis, practical application and relevance of these articles for the Nepali Constitution. As one of the workshop participants put it, "it was a genuine and important workshop for me and my country as it is preparing to implement a federal structure, and I am now convinced that federalism will not disintegrate Nepal.”

Participants plan to share the knowledge they acquired by conducting interactive programs in their own organizations, giving lectures, writing articles and applying what they learned in their day-to-day work. The Forum will collaborate with the participants through follow-up activities to assist them in transferring the knowledge.

This workshop is a component of the Forum’s three-year program in Nepal aiming at helping Nepal build its capacity for developing and implementing a federal democratic system. It is funded by the Swiss Agency for Development and Cooperation.