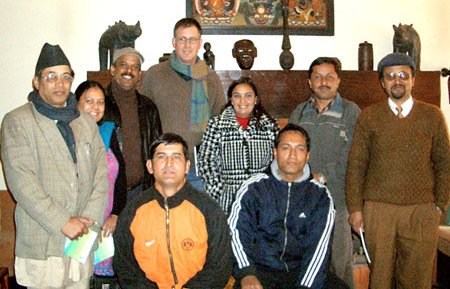 A group of Nepali journalists recently discussed the pros and cons of federalism with David MacDonald, the Forum’s Director for the Asia-Pacific. Mr MacDonald (in the back row) was in Kathmandu to meet with representatives of the Government of Nepal, political parties, civil society and officials with international organizations to discuss Nepal’s current needs and the scope of the Forum’s engagement in Nepal, in Kathmandu .

While a welcome air of relative peace hangs over Nepal as its people debate whether federalism is the right long-term formula for the country, the Forum of Federations was recently in that country to prepare the groundwork to contribute to those discussions.

During his recent mission to Nepal, David MacDonald, The Forum’s director for Asia Pacific, engaged in exchanges with Nepali journalists on the pros and cons of federalism.

It was just two years ago that Nepal, which is nestled between China and India, emerged from a 10-year civil war in a conflict led by Maoists who clashed with the Royal Nepal Army. The royal army fought unsuccessfully to maintain the country as a kingdom.

Nepal recently proclaimed itself to be a federal country, but that is subject to a constitutional review process that is to be held sometime after elections in April.

The purpose of Mr. MacDonald’s mission was to gauge how the Forum could be helpful in supporting the constitutional transition process.

Mr. MacDonald met at length with about one dozen journalists from a local NGO, Freedom Forum, which promotes freedom of the press in Nepal. They exchanged on a wide range of topics, focusing in particular on questions which will most likely be raised during future debates on how to amend the constitution.

The journalists raised a variety of issues, such as:

While in Nepal Mr. MacDonald met with representatives of the Government of Nepal, major political parties, civil society and officials with international organizations. His discussions focussed on Nepal’s current needs and the scope of the Forum’s engagement in Nepal.

The Fourm expects to open an office in Nepal later this year and launch a multiyear program to assist the country address questions of concern to Nepalis, questions similar to those raised by the journalists.