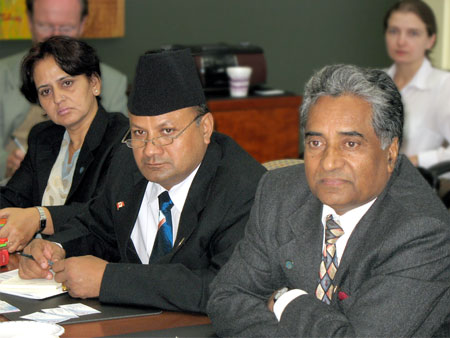 A delegation of lawyers with the Nepal Bar Association recently visited the offices of the Forum of Federations to discuss topics of vital interest to Nepal, a country that is considering a federal system of government after a ten-year-long civil war and a recent democratization.

The delegation discussed with Forum officials how wealth is shared in federal countries and the relationship between language and federalism.

Nepal recently emerged from a sporadic 10-year Maoist insurgency which ended in November 2006 when a deal was struck with the Maoists allowing them to lay down their arms under the promise of new elections in which the Maoists would participate.

The delegation received presentations from Forum President George Anderson, who spoke of the challenges facing Nepal, as well as from CÃ©line Auclair, the Forum’s Vice President, and Rod Macdonell, the Senior Director of Public Information.

Nepal, nestled between the borders of India and China, is one of the poorest countries in the world. There are at least eight different languages spoken there by its population of almost 30 million.

Mr. Anderson, who told the delegates that the Forum may participate in efforts to assist Nepal in better understanding the workings of federalism, observed that Nepal has a complex history and ‘determining who you are and how you define yourselves will be central to your future.’

‘You do not have an agreed sense of what the federal system would look like,’ Mr. Anderson said. ‘You may not want to try to do everything at once.’