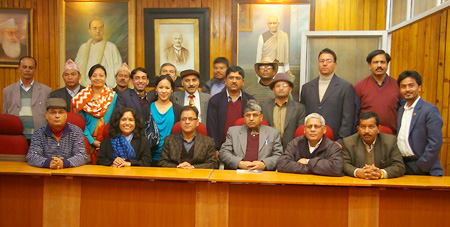 Nepali officials pause for a group photo during their two-week federalism workshop in India.

Nepali decision-makers and officials recently participated in a two-week International Workshop on Federal Governance in India.

The workshop, held in India from November 23 to December 4, 2009, was organized by the Forum in collaboration with the Indian Institute of Public Administration, established in 1954 by then Indian Prime Minister Jawaharlal Nehru to facilitate training and research on matters relating to public administration.

The objective of the workshop was for participants to acquire general knowledge about federalism issues as well as more in-depth knowledge about the operation of the Indian federal system of governance to develop ideas about its relevance and adaptability in Nepal, as the country is drafting a new federal democratic constitution and preparing for the implementation of a new federal system.

The workshop explored various aspects of federal governance including presentations on the Indian constitution and federalism, affirmative action, local government, inter-governmental relations, fiscal federalism, the civil service, the judicial system and linguistic diversity in the Indian federation. The Nepalis attended a series of interactive presentations from experts, and conducted visits to government institutions such as the National Commission for Minorities, the National Human Rights Commission and the Election Commission.

During the second week of the workshop, the participants visited the newly-established Indian state of Uttarakhand. Participants found the visit to be particularly relevant as they interacted with state government officials and learned of the challenges associated with the creation and operation of a new state which bears many geographical and ethnic similarities to Nepal.

The workshop concluded with participant presentations addressing four major themes relevant for Nepal: division of powers, local government, state structure and institutions and delineation of boundaries. In the words of one participant: "It was a genuine and important workshop for me and my country as it is preparing to implement a federal structure.”

Participants plan to share the knowledge they acquired by conducting interactive sessions in their own organizations, giving presentations, writing articles and applying what they learned in their day-to-day work. The Forum will collaborate with the participants through follow-up activities to assist them in transferring the knowledge.

The events were held in Delhi and in the state of Uttarakhand. The Forum was represented by Ms. Irina Shmakova, Program Manager for Asia-Pacific; and Vickal Deep Khadka, Nepal Program Manager, Nepal Field Office.

This workshop is a component of the Forum’s three-year program in Nepal aiming at helping Nepal to build its capacity for developing and implementing a federal democratic system. It is funded by the Swiss Agency for Development and Cooperation (SDC).