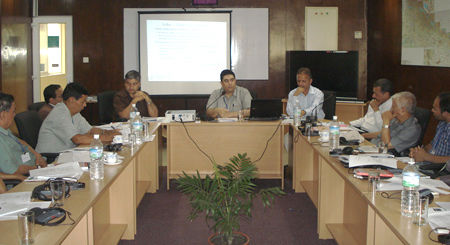 Drafters of Nepal’s constitution talk security and vocation of Kathmandu.

The Constituent Assembly of Nepal, the body which has been drafting Nepal’s new constitution for many months, has mostly been debating the form of government for the new Nepal, its number of provinces and their borders.

Assembly members recently stepped away from those heady issues, changed the channel, and participated in two Forum workshops that dealt with the topics of governance of capital cities and security management in federal systems.

The Forum organized the two events in order to raise the awareness of the constitution-makers of the importance of thinking through the policy and implementation issues on these key subjects.

The first event on Finance and Governance of Capital Cities in Federal Systems took place on April 22, 2010 in Kathmandu. The workshop focused on how federal capitals are organized, their relationship to the federal government and how they are financed.

The workshop included a presentation by Mr. Rupak Chattopadhyay, vice-president of the Forum of Federations; commentaries by national experts, Mr. Purnaman Shakya and Prof. Puspa Raj Kandel; and an open discussion with the participants. Forty-five participants attended, including the Constituent Assembly members, representatives from civil society organizations, and the National Planning Commission as well as officials from other ministries.

The main issues addressed were the:

The second event, focusing on Security Management and Federalism took place on April 23, 2010, and was organized in collaboration with UNDP/CCD and the Asian Studies Center for Peace and Conflict Transformation, an independent Nepali think-tank working on providing in-depth analysis and training on Nepal’s conflict, peace process, and state of security.

The objective of the event was to share the experiences of federal countries in security management with a focus on how federal countries manage the delivery of public public security, deal with the integration of forces, achieve representativeness and diversity and manage their policing.

The event was attended by 34 participants including members of Nepal’s Constituent Assembly, political leaders, senior officers from Nepal’s army and police, and other stakeholders.

The main presentation was delivered by Rupak Chattopadhyay of the Forum followed by a commentary from Dr. Bishnu Upreti, a national expert, on practical information relevant for Nepal. There was also an open discussion where the experts and participants discussed at length the related operational and substantive issues that Nepal will have to tackle.

Mr. Chattopadhyay was accompanied on his Nepal mission by Mr. Vickal Khadka, the Forum of Federations’ Nepal Program Manager.

The Forum’s three-year program in Nepal is funded by the Swiss Development and Cooperation Agency (SDC) and aims to assist the country in building its capacity to develop and implement a federal democratic system.