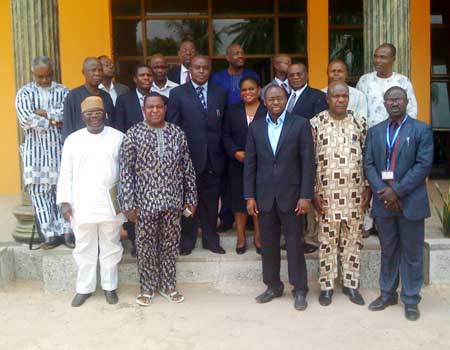 Participants at a Nigerian roundtable held recently in Benin Cit, Nigeria pose for a photo.

Members of government, academics, activists and federalism practitioners from across Nigeria met recently to discuss intergovernmental relations in that sub-Saharan nation, the most populous in Africa.

The event was co-ordinated by Eghosa Emmanuel Osaghae, professor at Igbinedion University Okada, and the Forum of Federations, as part of the Forum’s Global Dialogue program on Federalism.

Participants also discussed the issues of states’ rights, local government autonomy and the effects of the centralized electoral system on intergovernmental relations. Participants also questioned whether Nigeria is practicing true federalism given the political and fiscal domination of the federal government and its monopoly of instruments of coercion and security, which have made the states relatively weak constituent units.

The most interesting point of discussion was the topic of the status of local government in Nigeria. The roundtable posed a number of difficult questions on this topic such as:

The roundtable took place on March 23, 2009 in Benin City, about 240 kilometres east of Lagos.