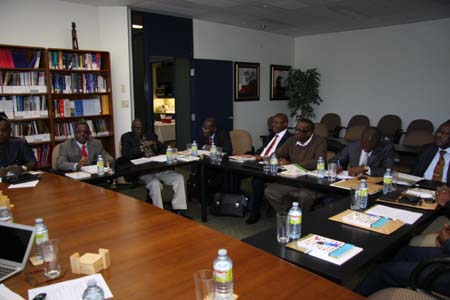 The Forum was honoured to host a visiting delegation of the Nigerian Senate Committee on the review if the 1999 Nigerian Constitution. The delegation was at Forum headquarters over two days from 10 11th of September.

The Senate Committee study tour focused on the Canadian federal system and experience in five main areas of interest to the constitutional review committee’s work, these were:

The Senate Committee was composed of Senators:

Members and Consultants to the committee were:

The committee was greatly honoured to include as part of their discussions Nigeria’s High Commissioner to Canada, His Excellency Ambassador Ojo Uma Maduekwe, who is the former Minister of External Affairs of the Federal Republic of Nigeria and only recently arrived to fulfill his mandate in Canada.

The final day of the visit also included, as part of the program, a Lunch and Learn presentation by the Nigerian Senate Committee on perspectives of Nigerian federalism. The delegation offered their insight on the comparisons between the two federal systems of Nigeria and Canada; as well as a description of their important work as part of the Constitutional Review Committee to the group of invited guests.