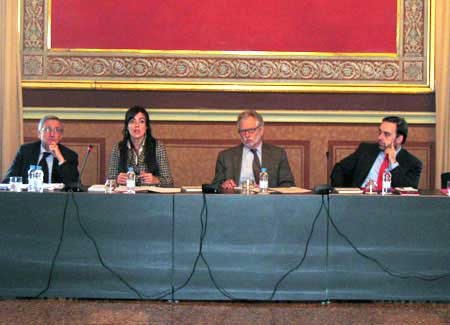 While Spain’s constitution does not define the country as federal, the decentralized nature of its government makes intergovernmental relations a highly relevant issue.

Intergovernmental relations among a country’s states, provinces and other subnational units are noteworthy because they are indicative of the level of interaction and collaboration among a federation’s constituent units.

This was the topic of discussion of at a recent Forum roundtable, part of its Global Dialogue on Federalism series, where 35 Spanish government officials, academics and federalism experts hashed out the issue.
In 1978, Spain enacted a new constitution that allowed some provinces and territories the right to self-government. By 1986, 17 so called "autonomous communities” had been created (as set out in the Statutes of Autonomy governing the communities). Also, two cities, Ceuta and Melilla, were granted autonomous status by the Spanish Parliament. While use of the term "federal” is often controversial in Spain, many federalism experts maintain that Spain meets the basic criteria to be considered a federation.
Participants at the roundtable discussed relations between the central government and the autonomous communities and issues between the autonomous communities themselves.

The combination of bilateral and multilateral relations between the central government and the autonomous communities was the most controversial topic of the day. In the end though, participants agreed that there are lively intergovernmental relations among Spain’s constituent units, which is a positive outcome of the country’s decentralization process.

The roundtable, held at the Institut d’Estudis AutonÃ²mics in Barcelona on March 23, 2009, was coordinated by MarÃ­a JesÃºs GarcÃ­a Morales of the Autonomous University of Barcelona.