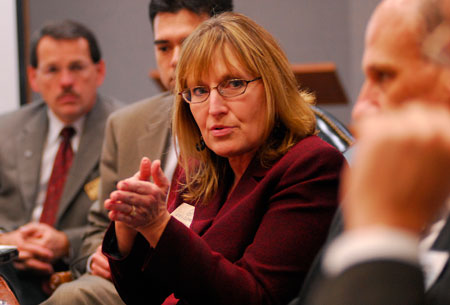 Ann Clemmer, member of the Arkansas House of Representatives, making a point to the roundtable participants in attendance in Conway, Arkansas

Civil society leaders, politicians and political scientists from several universities in the United States gathered in Conway, Arkansas, recently to discuss the interaction of American political parties, interest groups, and other elements of civil society with the American federal governing structure.

The occasion for the gathering was to discuss the topic of Political Parties and Civil Society in Federal Countries, the current theme of the Forum of Federations’ Global Dialogue on Federalism program.

Participants shared their practical experience in the field of federal politics.

In the discussions, each participant highlighted an area of personal interest or concern. The main points that emerged were the role played in the political process by interest groups such as NGOs, non-profits, and other civil society organizations. Participants then compared the federal practices and experience of several federal countries around the world.

Some participants expressed the view that the distribution of governing responsibilities in the American federation is shaped by civil society organizations. Others claimed that the actions of the federal and state governments are shaped by the influence of these organizations. There is ample evidence that both occur in the U.S. federal system.

The influence of social networks and their staying power were also raised as questions worthy of future attention. Another topic raised was the convergence of information and entertainment media into what is called "infotainment. »

Before departing the next day, participants visited the William J. Clinton Presidential Library, the Douglas MacArthur Museum, and the Little Rock Central High School, now a historic site as it was restricted to whites only, and desegregated by a 1954 ruling of the Supreme Court. This led to a showdown in which the U.S. Army was sent in to protect African-American students, allowing them to attend the school.