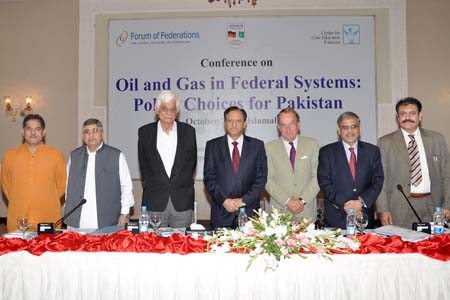 The Centre for Civic Education and Forum of Federations held a "National Conference on Oil and Gas in Federal Systems: Policy Choices for Pakistan” on October 21-22, at Islamabad, supported by the German Foreign Office.

The Conference is a part of a Program "Strengthening Federal Dialogue in Pakistan” as a prelude to the conference a series of provincial meetings on the same theme had been facilitated in all the four provinces in summer 2011 and now in order to enrich the process relevant federal, provincial stake holders and internal and national experts were brought together on one table to address some of the issues and grievances in the wake of the 18th constitutional amendment which has given rise to a new paradigm of participatory federalism and provincial autonomy on many issues along with natural resources.

Executive Director of Center for Civic Education of Pakistan (CCEP) Zafarullah Khan welcomed the participants to the two day deliberations. Mr. Ferdinand Jenrich, from the Embassy of The Federal Republic of Germany in his welcome remarks congratulated the Pakistani Government on the necessary and challenging decision of going ahead with the 18th Constitutional Amendment. He said that it was quite an ambitious process, which would indeed shape the structure of the Pakistani government in future and also increase the service delivery to the Pakistani people in various sectors including Oil and Gas.

George Anderson President Emeritus Forum of Federations in his key note speech explained the international prospective of oil and gas. He deliberated upon the factors affecting the dynamics of oil and gas in federations and said that the theory largely favors federal assignment and its uneven distribution can cause disparities among federating units. Sharing petroleum revenues, which can be highly emotional issues, can be handled very differently, the bigger the revenues, the more likely there will be some sharing amongst constituent units. Whatever the constitutional arrangements, there are strong reasons for engaging local communities in producing areas to address their concerns and give them some stake in the activity.

Former Federal Secretary Petroleum and Natural Resources Dr Gulfaraz Ahmad in his key note address informed the participants that Pakistan is greatly under explored and is also very deficit in indigenous production of oil and gas its import eats up more than 40% of the total export. We need to increase exploration and production of oil and gas as a national priority. But this is highly capital and technology intensive. Public sector does not have enough capacity or technology to carry out the required level of activity. So our thrust lies in the private sector. Our challenge is to attract investment in the high risk upstream petroleum sector. Post 18th Amendment, a technical committee has been created under the Director General Petroleum Concessions (DGPC) that includes provincial representatives to resolve the regulatory issues. Since the passage of the 18th Amendment, there is a stalemate in the award of licenses for the new system to crystallize.

All benefits of producing oil and gas in the form of oil royalty, gas royalty, gas excise duty and gas development surcharge, however, are collected by the Federal Government and transferred straight to the concerned provinces in line with the provisions of the Constitution. He also complimented the sponsors; Forum of Federations Canada, Government of Germany and Centre for Civic Education Pakistan, for organizing a long term program to strengthen federalism in Pakistan.
Punjab Finance Secretary Tariq Bajwa said that after the 18th Amendment the provinces have become fifty percent owners of the assets of oil, gas and minerals. "This require creation of federal institutions with adequate representation of provinces, instead of the institutions of the federal government,” He said that the Council of Common Interests (CCI) is the only forum where equal representations are given to each federating units and they could easily addressed their problems. He also advocated that Provinces may be given 50% dividends from state-owned companies and equal representation of provinces with the Federal Government in Petroleum Authorities.

Khyber Pakhtunkhwa Finance Secretary Sahibzada Saeed Ahmad informed the participants that several petitions have been filed in Peshawar High Court and the people from the areas where discoveries have been made have demanded more incentives and that companies should be made to fulfill their corporate social responsibilities.
Speaking on the occasion, former Senator Taj Haider said that with equal ownership the provinces should also be engaged in policy making including price fixation and other matters. He raised the question that gas companies earn huge profits but the percentage of the royalty that provinces get is fixed at 12 percent.

Other prominent speakers on this occasion were Dr Ishaque Baloch Vice President National Party said Balochistan who said that input from the federating units should be considered in policy-making decisions such as agreements policies in exploration of natural recourses share. Mr. Mazhar Farooq, Secretary General, Pakistan Petroleum Exploration and Production Companies Association (PEPCA) gave an industry prospective regarding concerns arising after the 18th amendment and said that there should be clarity in the present laws and rules, and clear lines defined between role and responsibilities of the entities involved in oil and gas sector.