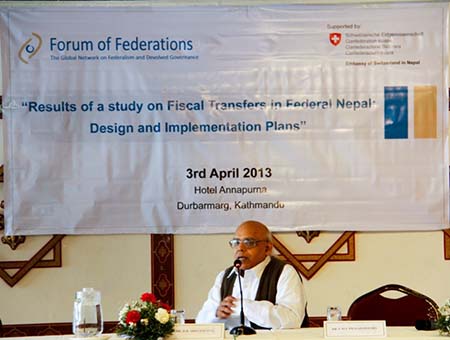 Above Dr. D. K. Srivastava presents during the discussion sessions which took place April 3-5, 2013 in Kathmandu.

The success of the federal arrangement including a smooth transition to an effective and stable system of governance in Nepal will depend greatly on the design and implementation of fiscal transfers. With the support of the Swiss Federal Department of Foreign Affairs, Political Affairs Division IV, the Forum of Federations has implemented a project entitled "Design and Implementation Plan for a System of Fiscal Transfers in Federal Nepal ». The project aimed to increase the knowledge and understanding of options and comparative practices in designing the system of fiscal transfers through a knowledge exchange program with representatives of Nepali institutions, notably the Local Bodies Finance Commission as well as other government institutions and political parties. The project’s main output was to conduct a study on the design of a system of fiscal transfers in federal Nepal and propose an implementation plan highlighting the findings and a methodology for application. The project’s objective was also to raise awareness amongst decision and opinion-makers and increase their understanding of fiscal federalism.

The study was lead and prepared by Dr. D.K. Srivastava, international specialist in the area of fiscal federalism and macro-economic modeling for forecasting and policy simulations with inputs also provided by international decentralization experts Prof. B. Dafflon, Department of Political Economy, University of Fribourg, Switzerland who provided insight on systems of fiscal transfers in federal and decentralized states and Dr Jaya Josie of the Human Sciences Research Council (HSRC) in South Africa and former Deputy Chairperson of the Financial and Fiscal Commission(FFC) who provided comparative understanding of the institutional arrangements and working of fiscal transfers in South Africa. Reports were commissioned by Nepalese experts on natural resources including water, forest and mineral resources highlighting aspects related to location, assessment of economic potential, principles of determining property rights and principles for determining revenue sharing arrangements. The study report is produced as a publication entitled "Fiscal Transfers in Nepal: Design and Implementation Plan » in sequel to the 2011 publication "Key elements of a New Fiscal Regime in Federal Nepal ». 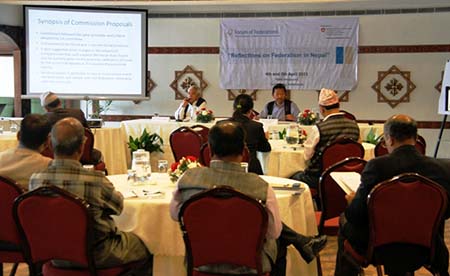 The Forum organized two discussion sessions in Kathmandu in early April 2013. The first session was led by Dr. Srivastava on April 3 to disseminate the results of the study to key stakeholders from Ministry of Federal Affairs and Local Development, Ministry of Finance, and Local Bodies Fiscal Commission at the national and sub-national level. The author sharing the report highlighted issues pertaining to Vertical and Horizontal Imbalances in Federal Nepal, Designing Fiscal Transfers: Methodology and Selected International Experience, and Managing Natural Resources in Federal Nepal.

The second session on 4 and 5 April was lead by Dr. Clive Grace, Senior Advisor, Forum of Federations and Dr. D.K. Srivastava. The workshop targeting a wider audience of leaders and decision makers renewed dialogue on Federalism in the Nepalese context. The issues discussed included Comparative Experience and Concept of Federalism (Nepal Context) by Prof. Krishna Khanal; Fiscal Administration in Decentralization Modules (addressing fiscal issues, including fiscal transfers) by Dr. Srivastava; and Decentralization in Civil Administration by Dr. Grace.

The publication of the study findings and implementation plan was jointly launched by Dr. Srivastava, Dr. Clive Grace, Senior Advisor, Forum of Federations and Martin Stuerzinger, Senior Advisor for Peace Building, Embassy of Switzerland during these events.