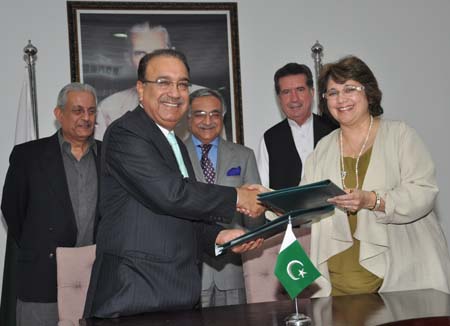 Signing the agreement was (left to Right) Anis-ul-Hasnain Musavi, Secretary of Inter-Provincial Coordination and Ms. Sheela Embounou, Head of Monitoring and Funder Relations at FOF.

The signing ceremony of the Framework Agreement between the Forum of Federations and the Islamic Republic of Pakistan in Islamabad on 29 March 2012.

The agreement was signed by the Secretary of Inter-Provincial Coordination Anis-ul-Hasnain Musavi on behalf of the Republic and Ms. Sheela Embounou, Head of Monitoring and Funder Relations, representing Forum of Federations. The Honourable Federal Minister for Inter-Provincial Coordination Mir Hazar Khan Bijarani, Senator Mian Raza Rabbani and Senator Afrasyab Khatak also attended the ceremony.While speaking at the occasion, Ms. Sheela Embounou congratulated Pakistan on becoming a partner of the Forum of Federations. Addressing the participants of the ceremony, Federal Minister Bijarani said, "It is a historic day in the history of Pakistan when the Islamic Republic of Pakistan is becoming a member of the Forum of Federations”. He further said that it is indicative of recognition of Pakistan as a strong federation by the international community. The Minister hoped to learn from other strong Federations by virtue of the membership of the Forum of Federations. Referring to the 18th Amendment to the Constitution of Pakistan, Minister Bijarani hailed the sincere and prolific efforts of Mian Raza Rabbani, who is the mind behind the amendment and played significant role in its passage.Speaking on the occassion, Senator Mian Raza Rabbanii said, "The Eighteenth Constitution Amendment would have been impossible without the cooperation of the active democratic forces in Pakistan”. He further said that Pakistan will certainly become a role model of federalism for the Federations across the globe. He said with utter confidence that after the Eighteenth Amendment the provinces have progressed towards self-sufficiency. He said, "After the Eighteenth Amendment, the provinces now have fifty per cent share of gas and petroleum”. Pakistan becomes the 10th partner country of the Forum.