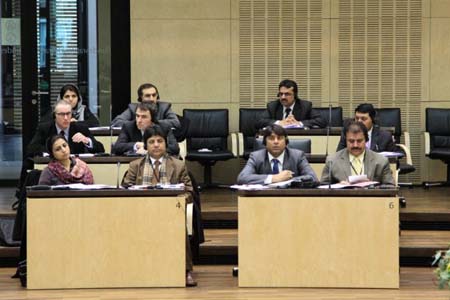 On the 19th to 23rd February a ten-member Pakistani delegation was on a working study visit to Berlin, Germany. The delegation visited several German federal political, academic and social institutions in Berlin and Brandenburg. The Pakistani delegation was able to gain first hand and in depth knowledge of German political institutions and processes.
The study tour started with an introduction on "Federalism in Germany” by Prof. Dr. Julia Blumenthal, at the Institute for Social Sciences, Humboldt University Berlin. Dr. Blumenthal gave a general overview of the Federal system of Germany, explained the historical development of federalism in Germany, societal foundations of German federalism and how the divide and then unification effected the institutions and their designs in federalism.
The delegation visited the German Bundestag, the first chamber of the German parliament; its Deputy Director, Dr. Horst Risse, gave a detailed presentation on the workings of the two chambers of the German parliament followed by a tour of the historical Bundestag Reichstag Building. The group also visited the "Association of Municipalities”, the representative unit of German cities. Oliver Mietzsch, one the Directors of the association, briefed the delegation on "The role of municipalities in Germany’s Federalism” and explained their role which was to act as safeguard for the rights of the citizens of the member metropolitan cities of Germany.
The tour included a stop at the Landers offices (Provincial/State government) to observe their system of administration. The delegation visited the offices of the Lander of North Rhine-Westphalia the largest â€˜land’ in Germany, based in Berlin. Dr.Bernd Miller, Director for International & Press affairs gave a presentation on competencies, responsibilities and role of his organization.
At the "Brandendenburg” State Landtag at Potsdam, the Pakistan delegation was welcomed by the President of the parliament, Gunther Fritsch and met Ministers and Parliamentarians from all political parties and discussed the tasks and political realities of a German Federal Laend (Lander). The delegations later had a tour of the State Parliament and were briefed about the history and parliamentary structure and working of the State legislative body.
The delegation also visited two Federal Ministries in Berlin, the Federal Ministry of Interior and the Foreign office, Dr. Bernd KÃ¼ster, Head of Section, Department for Interior and Justice, gave a description of the role, function and responsibility of that ministry, which is responsible for the functioning of federalism.
The last meeting of the three day study tour was at the Ministry of Foreign Affairs with the head of the Afghanistan- Pakistan task force, where issues of bilateral interest were discussed.
The participants thanked the Foreign office for funding and supporting the project in Pakistan and extended their opinion that the project is a very timely intervention for developing and strengthening federalism in Pakistan.
Members of the delegation included: Mr. Khalil Tahir, Member Punjab Assembly, Dr. Ishaque Baloch of the National Party, Mr. Murtaza Noor of the Higher Education Commission of Pakistan, Mr. Zalan Momand, editor of daily Sach, Ms. Kamellah Khan of the Islamia College University in Peshawar, Mr. Amir Adbullah Malik, advisor to Governor of the Punjab, Mr. Fayaz Ahmed Naich of Sindh TV, Ms. Noreen Haider, former member of the Punjab Chief Minister’s Monitoring and Implementation Cell, Mr. Emmanuel Khurshid of the Forum Federations, and Mr. Quraysh Khattak of the Centre for Civic Education Pakistan