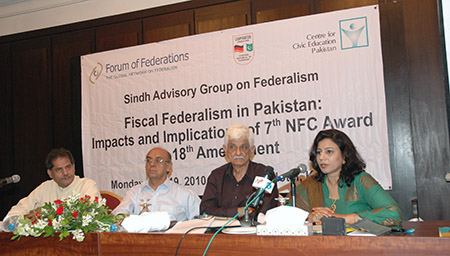 Ms. Humera Alwani, a member the Province of Sindh Assembly, speaks at a meeting of that province’s Policy Advisory Group on Federalism. Also in the photo are (from right to left) Mr. Taj Haider, former Senator and Provincial general secretary of Pakistan Peoples’ Party, Mr. Abrar Kazi and Mr. Executive Director of CCEP Mr. Zafarullah Khan.

More than 50 participants at a Forum event in Karachi debated what will happen to Pakistan’s federal architecture if increased financial powers are granted to Pakistan’s provinces.

The participants in the event, held July 19, 2010, discussed these key issues at the third provincial roundtable on fiscal federalism. Participants included representatives of the provincial government of Sindh.

The key note speaker of the session was Dr. Kaiser Bengali, a noted Pakistani economist.

Dr. Bengali said that Pakistan is passing through a significant period as there is a major power shift going on, from Islamabad to the provinces. Another undercurrent is Pakistan’s move toward greater democratization, for which many sacrifices were made including the assassination of former Prime Minister Benazir Bhutto.

He said a new era has begun. Provinces are becoming stronger but will have to develop their own planning capacity.
There is no reason why poverty cannot be reduced in the province of Sindh, he said. Sindh is Pakistan’s OPEC, with 70% of the country’s gas resources and 99 % of its coal, there is no reason for poverty here.

Pakistan has four provinces. The province of Sindh has a population of about 35 million.

Sardar Ahmed, the advisor to Sindh’s chief minister, commented that the fiscal event was a very impressive seminar, the topic discussed was an important one, with participants and organizers focused on the topic. The people participating are of very good quality, he noted.

He observed that the federal bureaucracy is very strong, entrenched, and he warned that it will try to stifle constitutional plans granting powers to the provinces.

He said that Pakistan came into being in 1947 as a federation, but in name only. Pakistan is in fact still a unitary form of government, he said.

Later, Ms. Humera Alwani, a member of the Sindh Provincial Assembly, spoke on the Role of Parliamentarians’ in Implementation of the 18th amendment.

She said that as a young parliamentarian she came to the fiscal event to learn, and did indeed learn a lot that day. She predicted that after the 18th amendment takes effect next year, a large burden will fall on the shoulders of parliamentarians.

Under the amendment, several federal departments, such as education, health and labour will be devolved to the provinces. A surplus of human resources will also be created. Parliamentarians, she said, will have an important role to run, monitor and gauge the accountability of these departments.

The final session was led by Akbar Qazi, a politician and technocrat, who discussed the impact of the financial commission’s demands for greater financial transfers to the provinces.

The first result will mean that elected officials will be able to sit together and make collective decisions, Mr. Qazi said. This will help bolster the public’s confidence in politicians and in the political process.

He said that the public’s faith in democracy has been revived. Anti democratic forces have received a big shock, he said, and thanks to the initiatives of the National Finance Commission and the 18th constitutional amendment, a new more effective method of decision-making has emerged.

The Forum’s Pakistan work is funded by the Government of Germany. The project commenced in August 2009 and will continue until the end of 2011.

For more information on the Pakistan project, please contact Marc Lemieux at lemieux@forumfed.org.