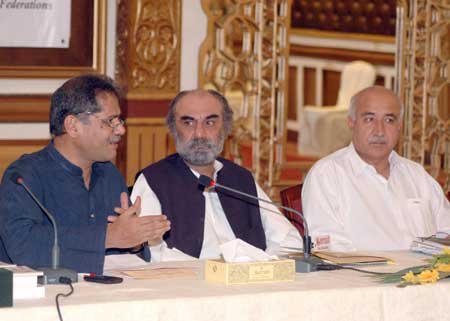 The last of the Provincial Policy Advisory Group meetings on fiscal federalism for the Pakistani province of Balochistan was held in Islamabad, on Aug. 18, 2010.

The event was organized by the Centre for Civic Education Pakistan and the Forum of Federations. It was titled Fiscal Federalism in Pakistan: Impacts and Implications of 7th National Finance Commission Award and 18th Amendment.

The 18th Amendment is an important recent revision to the Pakistan constitution that restores many powers to the provinces while the award of the 7th National Finance Commission is the determination by the federal government of a formula whereby the central government shares revenues with the provinces.

Dr. Gulfaraz Ahmad was the keynote speaker at the fiscal event. He was a member of the 7th National Finance Commission representing Balochistan. He thanked the Forum of Federations and Centre for Civic Education for inviting him.

Dr. Ahmad said that an important aspect of the finance commission award to Balochistan is that even if the federal government does not meet its revenue projections in the coming years, it has guaranteed Balochistan that the province will be given its share of the revenues even if the other provinces do not get their share.

This will help Balochistan reach parity with Pakistan’s other three provinces and enable it to enter into an era of financial stability and empower the province to take the necessary steps to curb the economic deprivation that has long plagued the province.

Senator Dr. Abdul Malik Baloch, a member of the commission for Implementation on 18th Amendment, chaired a session at the Islamabad event, which was attended by 30 participants including activists and office bearers of political parties, representatives of civil society as well as students from Balochistan.