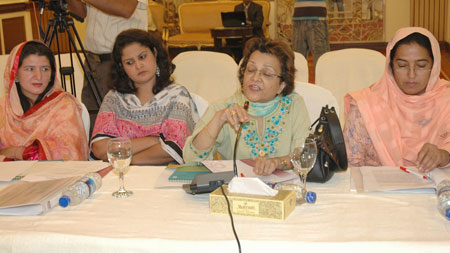 Dr. Nelofer Halai of Aga Khan University, Karachi, speaks at a Roundtable Conference on â€˜Federal-Province Role and Responsibilities in Education’, arranged by the Centre for Civic Education Pakistan and the Forum of Federations. To her left are: Ms. Ishrat Afshan Abbasi of Sindh University, Jamshoro, and Ms. Rabia Anees of Provincial Institute for Teacher Education, Peshawar [Khyber Pakhtunkhwa]. To her right is: Prof. Dr. Razia Mussarat of Islamia University, Bahawalpur (Punjab).

The Centre for Civic Education Pakistan and the Forum of Federations organized a roundtable on September 21, 2010 in Islamabad on Federal-Provincial Roles and Responsibilities in Education.

The conference was held at a significant moment as the 18th Constitutional Amendment in Pakistan significantly decentralizes the way education will be planned, managed and financed in Pakistan – transferring powers to the provinces.

The amendment states it shall be a fundamental right of all children from the age of five to sixteen to be provided with free, indeed compulsory education. The authority over the curriculum, syllabus, planning, policy, centers of excellence and standards of education, will fall exclusively in the hands of the provincial governments.

The chief guest of the conference was Sardar Asif Ahmed Ali, the Federal Minister for Education.

He said in his keynote address that there must be minimum national standards in the curriculum and textbooks in order to build national identity. He went on to state his personal opinion that total autonomy of the provinces with regard to development of curricula should only happen if there is a minimum standardization in the curriculum, otherwise it would do "incalculable damage” to the federation of Pakistan.

The federal Minister also stated the view that the provinces are ill equipped to change the language of instruction from Urdu to regional languages.

His views were opposed by intellectuals and educators present at the event who support provincial autonomy. They cited examples of how other federations operate and argued that stronger provinces are vital for a stable Pakistan.

Dr. Rasul Bakhsh Rais, a Professor of Management Sciences at Lahore University, commented that Pakistan needs to be guided by the spirit of the 18th Amendment, which represents a shift to a federal system of government and away from a unitary form.

Dr. Rais asserted that provinces should be free and have the liberty to develop their educational systems and programs according to their socio-economic and development needs.

Other speakers said that the 18th Amendment has opened up new opportunities in Pakistan, and that the window of opportunity should be used to reform the so-called "rot” that plagues Pakistan’s educational system.

The opinion was also articulated that citizens need as well to be vigilant that the best possible educational opportunities are ensured for future generations and keep in mind the imperatives imposed by the globalized world and the knowledge-based economy.

The roundtable was attended by more than 60 participants including the former education minister of Punjab; provincial secretaries of education departments from the provinces of Balochistan, Punjab, Sindh, and Khyber Pakhtunkhwa (previously called North-West Frontier Province); and officials of the Federal Ministry of Education.

Also in attendance were vice chancellors of four universities and the pro-vice chancellor of another university; officials of the Higher Education Commission and Federal Directorate of Education; the president of Private School Network; and 16 educationists/scholars from various universities/institutes; five research scholars; and representatives of 11 civil society organizations from across the country.

The Forum’s 2-1/2 year federalism program in Pakistan is funded by the German Foreign Office and runs until the end of 2011.