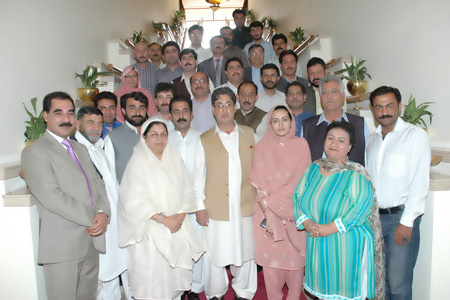 The Chief Minister of the newly-named Pakistani region of Gilgit-Baltistan recently urged all political parties and people of the new region to join hands as a gesture of resolve to make a success of the new system of governance for Gilgit-Baltistan.

The chief minister, Mr Syed Mehdi Shah, spoke on July 12, 2010, at a two-day conference in Islamabad, titled Gilgit-Baltistan Empowerment and Self-Governance: Challenges and Opportunities, an event arranged by the Centre for Civic Education Pakistan and the Forum of Federations in collaboration with the Gilgit-Baltistan Policy Institute.

The Northern Areas of Pakistan were given the new name of Gilgit-Baltistan by Presidential Order in October of 2009.

More than 50 people attended the July 12 13 conference, people who came to discuss the challenges and opportunities of Gilgit-Baltistan.

The Associated Press did a write-up of the event which described the holding-of-hands by the participants.

The federal Minister for Information and Broadcasting, Mr. Qamar Zaman Kaira who was the former Governor of Gilgit-Baltistan, was the chief guest at the opening session. In his speech Mr. Kaira said that the self-governance reforms will serve as a first step toward empowering people of the area.

Zafarullah Khan, Executive Director of the Centre for Civic Education Pakistan, predicted that the process of empowering people will not stop here since democracy in Pakistan is at its evolutionary process.

Renowned academic Dr. Rasul Bakhsh Rais said that amid the reforms, attention must be paid to the need for quality higher education for development of the area.

The Forum’s Pakistan program is funded by the German Foreign Ministry. It commenced in August 2009 and will run until the end of 2011.

For more information on the Pakistan program, please contact Marc Lemieux in Ottawa at lemieux@forumfed.org or Emmanuel Khurshid in Islamabad at forumconsultant@gmail.com