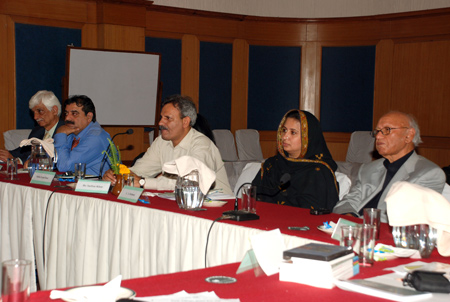 Twenty-one leading Pakistanis from the country’s four provinces and its main political parties assembled for two days near Kathmandu and engaged in wide-ranging discussions on the recent dramatic amendments to the country’s 1973 Constitution that restored considerable powers to the provinces, thereby making Pakistan more federal.

The participants included members of Pakistan’s Constitutional Reform Committee, its National Assembly, as well as representatives of provincial legislatures, civil society, universities and the media.

The title of the event, held May 1 2, 2010, was the National Conference on the Pakistan Constitutional Reform Process, Prospects for Inclusive Federalism.

The 18th Amendment to the Constitution was passed unanimously by Pakistan’s National Assembly on April 8. It restores a parliamentary system to Pakistan, increases the autonomy and responsibilities of its four provinces; and revises the way judges are appointed, securing their independence.

The discussions touched on numerous points including the diversity of Pakistan and the structure of the state.

The most significant changes to the federal structure of Pakistan are the removal of the lengthy list of concurrent powers of the central and provincial governments and the transfer of almost all the concurrent matters to the exclusive jurisdiction of the provinces. (Concurrent powers are responsibilities that are assigned to two orders of government, which can lead to over-lap and administrative confusion.)

There are now heightened expectations of the Council of Common Interests, an inter-governmental body which is intended to provide a space for provincial governments to participate in the formulation of policy on a list of matters that fall under the jurisdiction of the federal government but which inevitably concern provinces.

Two conference sessions dealt with the political geography of Pakistan and identity politics, including whether Pakistan should retain its four-province structure or be divided into more provinces. The issue of regional languages was also aired and whether they should be made national languages.

The focus on most of the sessions was on the new relationship between the federal government and the provinces, which led to questions on the adequacy of the tax base of the provinces in light of their expanded responsibilities. This discussion of fiscal federalism threw a spotlight on the magnitude of the shift in responsibilities to the provinces and the importance of adequate intergovernmental arrangements.

In the closing session, participants were cautioned about giving in to the pressures of implementing the transfer powers in too rapid a fashion.

As a result of the conference, participants increased their understanding of federalism and the attendees also realized the benefits of understanding the comparative experiences of other federations such as India and Canada and devolved countries such as South Africa, Spain, and others, Participants also increased their awareness of the work that still is to be done.

The conference was organized by the Forum of Federations and its partner, the Center for Civic Education Pakistan. Next steps in the program include:

The project, funded by the Government of Germany, commenced in August 2009. It will continue for two years.

Kathmandu, Nepal - a program for, Pakistan