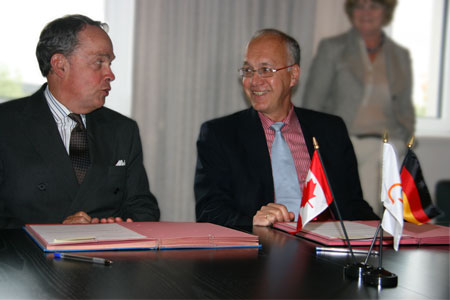 Dr. Georg Witschel, German Ambassador to Canada (right), speaks with Forum of Federations President George Anderson on Sept. 30, 2009, just before signing the contract for the Forum’s new program in Pakistan.

The Federal Republic of Germany and the Forum of Federations have signed a contract to carry out a two-and-a-half-year development assistance program in Pakistan.

The agreement, signed Sept. 30 in Ottawa, provides the Forum with approximately $3.5 million from the German Foreign Office between 2009 2011 to help in strengthening Pakistan’s federal system, a system that requires improved functioning between the central government and its four provinces and districts, as well as the tribal areas.

With its partner organization, the Pakistan Institute of Legislative Development and Transparency (PILDAT), the Forum will work to strengthen the capacities of key government institutions of intergovernmental relations to develop and implement policies for successful management and resolutions of centre-province conflicts.

The Forum’s program will aim to increase the capacity of Pakistani decision-makers, political parties, central and provincial civil servants, civil society leaders and the media, to evaluate and analyze federal options based on international best practices.

The program will also help build networks and partnerships within Pakistan and between Pakistan and the outside world, and enable the exchange of experiences and expertise in federal forms of governance. This will increase the ability of Pakistan’s central government leaders and stakeholders, as well as their provincial counterparts to discuss, develop, evaluate and analyze federal options.

Pakistan’s return to democracy began with free elections in February 2008 and continued with the resignation of General Pervez Musharraf from the presidency in August of the same year.

The German Foreign Office, in addition to its diplomatic and foreign policy roles, provides humanitarian aid to support people who are in need as a result of natural disasters, epidemics, armed conflicts or internal unrest.

In 2008, the Forum was granted $247,623 by the German Technical Cooperation Agency (GTZ) to implement a six month federalism support program in Nepal.