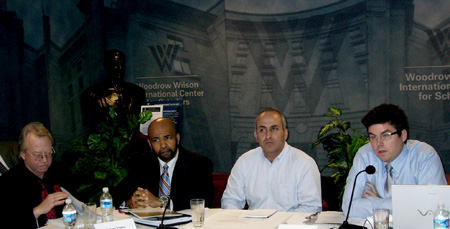 The rise of transnational crime and terrorism has challenged national security and law-enforcement arrangements in North America, requiring closer co-ordination between agencies, across orders of government, and across national borders.

To discuss these issues, experts from Canada, Mexico and the United States met on November 9, 2009 in Washington D.C. at a workshop titled: Co-ordinating Public Security in the North American Federations.

The workshop was organized by the Forum of Federations, and the Canada Institute, at the Woodrow Wilson International Center for Scholars, with organizational support from Yale University’s Macmillan Center for International and Area Studies.

The backdrop for the event is that the ever-expanding public security agenda in federal countries has shown that no order of government or agency is equipped to confront these challenges on its own. All three North American federations have security forces and police forces at the national, subnational, and municipal levels.

This one-day roundtable brought together experts and practitioners to:

Public security responsibilities are distributed much differently within the North American federations.

While Canada has relatively few subnational police forces (with Ontario and Quebec as the only provinces with police forces with their own police forces, while other provinces and territories are policed by the Royal Canadian Mounted Police), the United States and Mexico have a very decentralized policing structure that sees much of public safety administered by the state and local governments.

In recent years, however, the increased threats of organized crime and terrorism have led to central agencies taking up domestic security and enforcement challenges that surpass local security capacities. This has happened in Mexico, which has called on its armed forces to deal with drug crime in Cuidad Juarez, and with the United States military providing intelligence and surveillance support to US Customs and Border Protection, and in Canada which has developed its Canadian Forces’ Chemical, Biological, Radiological-Nuclear, and Explosives response capability.

The importance of information collection and sharing was underscored by experts from the three countries. Mexico has made great advances in creating a unified database that can be accessed by security actors from all orders of government. In the United States, the Department of Homeland Security has dedicated significant resources to the creation of fusion centres that co-ordinate the collection and distribution of information, as well as the policing operations that result from this information.

Canada does not use a common database for all orders of government, but relies on joint policing teams which share information relevant to specific investigations. Participants agreed that successful co-ordination is not guaranteed solely through policy reform, but rather through effective personal relationships of officers and officials from the various orders of government.

Participants identified issues such as institutions and process for setting national priorities, information sharing, training, co-ordinated operations, as issues for further discussion. The participants also recognized the existence of a tension between the need for effective local security and the increasing tendency of centralization in all federations.
The organizers of the event plan on publishing a report on the conference.