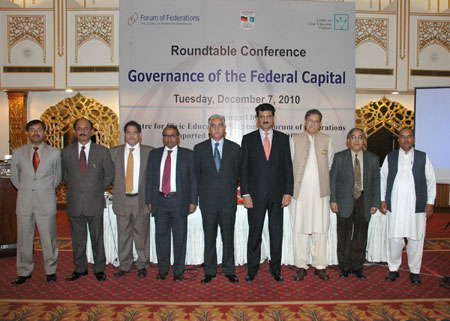 Participants at a Forum roundtable on governing Pakistan’s federal capital had specific recommendations for the governance of Islamabad.

A roundtable conference on governing Pakistan’s federal capital was held in Islamabad recently by the Forum of Federations and the Centre for Civic Education Pakistan. The conference was the first of its kind in the country, designed to start the debate on how the federal capital could best be governed. The event was timed to commemorate the golden jubilee of Pakistan’s capital.

In the words of one expert, "The 50th anniversary celebration of Islamabad is an occasion for collective soul searching on how much the federal capital has epitomized the unity in diversity in Pakistan.”

Participants in the conference analyzed the roles of capitals in various types of federations around the globe, the political importance of a capital within a federation, Islamabad’s financial management and the status and governance of Islamabad in the light of the devolution after the recently-adopted 18th amendment, which restored full federalism to the country.

One of the main conclusions emerging from the discussions was that Islamabad, as the capital, is the seat of democracy in Pakistan but the city itself is not governed democratically. Currently, the citizens of Islamabad have no say in the planning and administration of the city they live in.

Dr. Werner Thut, Vice President of the Forum of Federations, highlighted the role of the Forum in promoting academic and informed debate on federalism in federal systems across the world. He invited the participants to come up with solid recommendations after concerted deliberations on the topic.

The event received wide-ranging coverage in the national and local newspapers. The Forum and CCEP have planned another conference early in 2011 to follow up on the debate initiated by this event and to draw concrete recommendations from stakeholders, which will be forwarded to decision makers.