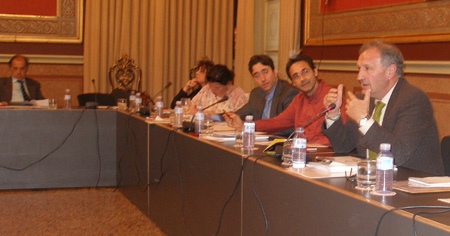 A participant makes a point at the Spanish Global Dialogue roundtable on diversity, held in Barcelona.

A roundtable sponsored by the Institut d’Estudis AutonÃ²mics on the theme of diversity and unity in Spain, was held on March 14, 2008, in Barcelona. The roundtable brought together academics and experts to discuss the process of decentralization and federalization that the country has undergone since the demise of Franco’s dictatorship in 1975.

Spain is not nominally a federation, but the country has evolved in the process of federalization towards what one participant described as â€˜a federation in disguise’ comprised of 17 Autonomous Communities. Experts in the fields of constitutional law, fiscal federalism, human geography, linguistics, modern history, political science, public administration, public policy, and sociology discussed the various topics around the issues of diversity and unity. Numerous references were made to the multilingual character of Spain’s Â« State of the Autonomies Â», which traditionally fuelled claims by minority nationalists, primarily Basque, Catalan and Galicia, with the objective of achieving higher degrees of home rule for their Autonomous Communities. Arguably, it was pointed out that, except for the dysfunctional workings of the Senate as upper legislative chamber of territorial representation, Spain’s Â« State of the Autonomies Â» could qualify as a federal system according the basic federalist criteria identified by Ronald L. Watts.