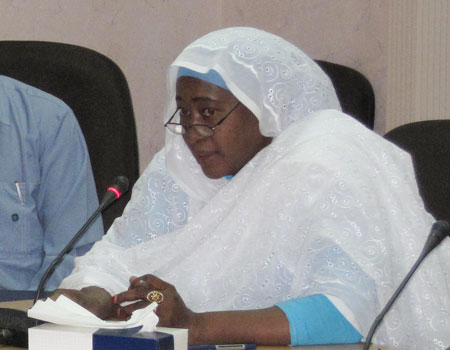 Amna Abbaker, director of the Allocation Division of Sudan’s Fiscal and Financial Allocation and Monitoring Commission, addresses a roundtable on fiscal federalism in Sudan on February 4, 2009.

The first roundtable discussion with Dr. Bell was hosted by Sudan’s Fiscal and Financial Allocation and Monitoring Commission (a key institution created by the Comprehensive Peace Agreement). The roundtable included representatives from the Ministry of Federal Governance, the Auditor General, Ministry of Finance and the Legislative Assembly. Commission Chair Dr. Mohamed Osman Abrahim led the meeting and noted that issues of tax harmonization and budget constraints were particularly important for his country. Another participant, Dr. Hilal, a member of the Economic Affairs Committee of the National Assembly, said that Sudan needed to adopt a "new culture” of co-operation in order to implement federalism and fiscal federalism.

A second roundtable session, hosted by the Economic Affairs Committee, included 25 representatives from Parliament and the Council of States. Discussion focused on the guiding principles of fiscal federalism and how they relate to the emergence of a federal government in Sudan. Key concerns included taxation sources between tiers of government, the role of local government, capacity and accountability issues.

Dr. Bell and Forum staff also held consultations with senior government officials and international partners in Juba, Southern Sudan to identify areas of possible future collaboration. In the Government of South Sudan, the Forum’s focal point is the Ministry of the Presidency.

In March the Forum will begin testing a one-day introductory course on fiscal federalism which will target a wide range of stakeholders from civil servants to legislators and political parties, to members of the media to promote better understanding and consensus on the basic principles of fiscal federalism and their relevance in Sudan.

Dr. Bell’s mission, which took place from February 1 to 9, 2009, is part of the Forum of Federations’ program on Federal Governance and Peace in Sudan. The program is funded by Canada’s Department for Foreign Affairs and International Trade. 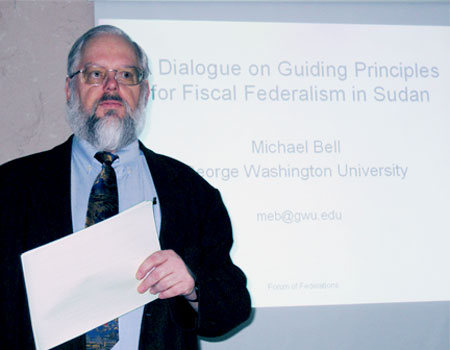