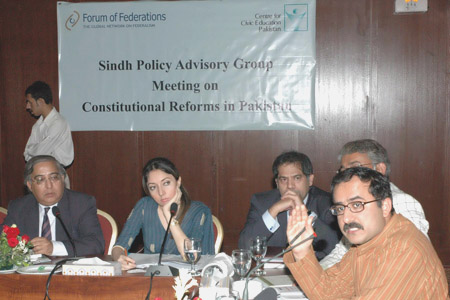 Pakistan’s constitution of 1973 should be restored and then amended to augment democracy and federalism, an advisory group meeting in Karachi, Pakistan recently recommended.

The group, from all political parties, several universities, trade unions and non-governmental organizations, was convened by the Forum and its local partner, the Centre for Civic Education, on Feb. 24, 2010.

The meeting of the 29 participants was moderated by Dr Jaffar Ahmed of the Pakistan Area Study Centre, University of Karachi.

The objective of the meeting was to evaluate constitution formulation in federal forms of governments and come up with implement able strategies in an advisory capacity.

The general consensus was that the 1973 constitution was not really a consensus document and that Pakistan became a structurally imbalanced federation after 1971, with one province dominating federal institutions and enjoying an absolute majority in the parliament over the other three provinces.

A concentration of power in the executive branch also emerged as a major source of conflict in Pakistan. One viable solution could be to empower the national senate, ensuring that the provinces have equal numerical representation and relative influence.

For now, the group recommended that the1973 Constitution should be restored and reverted to its original form. However, they asked for the abolition of the concurrent list of powers shared by the provinces and the central government. The group also suggested that in time Pakistan may need a new constitution formulated on the lines of federations like Australia and Germany and truly representative of the 1940 Lahore Resolution, the founding statement of Pakistani federalism.

The suggestions and recommendations were based on majority opinion of the group. The event was organized by the Forum of Federations and the Centre for Civic Education and supported by the German Foreign Office.