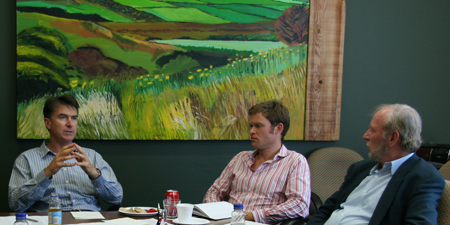 The difference in those two beliefs may have contributed to Rudd’s demise as Australian Prime Minister. "Prime Minister Rudd instituted wide-ranging federal reforms in his first year in government,” Fenna said. "But it was an iron fist in a velvet glove.”

The change in Rudd’s policies toward federalism was shown in Rudd’s announcement that the federal government was taking over the hospital system from Australia’s states earlier this year, Prof. Fenna explained. The move by Rudd came after the states failed to agree with his health reform plan.

Rudd believed in federalism until it impeded his agenda, said Prof Fenna, and when the states impeded his plans, he circumvented their rights.

That move, added to Rudd’s announcement of a forthcoming mining tax and a number of other gaffes, led to his ouster as Prime Minister.

The axe fell when on June 24, 2010, Rudd was replaced as Prime Minister by M.P. Julia Gillard in a closed-door meeting of the Australian Labor Party.

When this was announced, the public was stunned but not the members of parliament.

"This is normal in (Australian style) parliamentary democracy,” said Prof. Alan Fenna, "but the public was shocked by the fact that when they had dinner one night and Rudd was Prime Minister and then the next morning he was gone.”

The prospect of defeat for the Labor government surprised many Australian pundits, but may have reflected the public’s anger at the closed-door sacking of Rudd by the Labor Party.

The Australian general election on Aug. 21, 2010, had been so close that at the time of Fenna’s luncheon address on Aug. 31, there was still no new government. With 87 per cent of the votes counted, both the Labor Party and the conservative coalition had 50.00 per cent of the vote, with only a slight lead in the popular vote for the coalition.

He is Professor of Politics at the university’s John Curtin Institute of Public Policy. He teaches and researches in the fields of constitutions, public policy and federalism and is currently president of the Australian Political Science Association.

He is also directing an Australia Research Council study on the use of tied grants in Australian federalism and is the lead expert on the Forum of Federations’ Benchmarking in Federal Systems program.

Dr. Fenna has been an elected member of local government and worked in the Federal Affairs division of the Ministry of Premier and Cabinet of Western Australia. He is the author of four books, including Australian Public Policy (Longman 2004) and, with Thomas Hueglin, Comparative Federalism: A systematic Inquiry (Broadview, 2006). His most recent publication – Commonwealth Fiscal Power and Australian Federalism was published in the University of New South Wales Law Journal in 2008.

Prof. Fenna spoke to about a dozen federalism experts, academics and Forum staff at the Forum offices in Ottawa on Aug. 31, 2010.