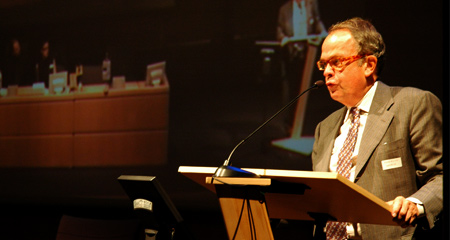 Forum President George Anderson addresses the 100 participants in Brussels at the conference on foreign and external relations of federated entities.

In many federal countries, the regions (provinces, states, LÃ¤nder, cantons) have the power to conduct foreign relations in certain sectors such as trade and commerce.

To share information about this and other issues of importance, the Forum recently co-organized an international dialogue between representatives and practitioners from the regions of countries as well as members of central governments in Europe and beyond.

About 100 representatives from European regions, academics and journalists tackled the issue of how regions with legislative powers practically implement their external policy, while focusing on public diplomacy, development cooperation and the organization of external policy.

The event helped generate knowledge and understanding of foreign policy techniques among practitioners and international experts. The conference also helped increase public awareness of federalism as well as its principles and mechanisms.

A partner of the Forum in this conference was the Flemish Department of Foreign Affairs, president of REGLEG in 2008.

Documents from the conference (PDF – opens in new window):