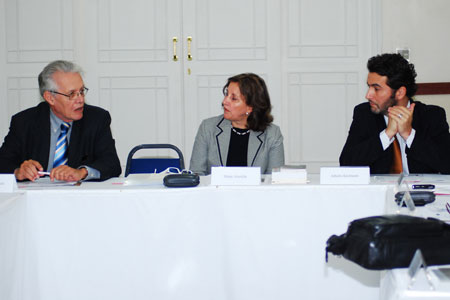 Roundtable co-ordinator Marta Arretche (middle) and Alberto Kleiman (right) of the Secretary for Federative Affairs listen to Fernando Rezende of the School of Public Administration (Brazil) at a recent Forum roundtable on intergovernmental relations in Brazil.

The challenges of delivering public services in a country characterized by regional economic disparities and varied local government capacity was discussed recently by a group of federalism experts in Brasilia. The roundtable on intergovernmental relations in Brazil was part of the Forum’s Global Dialogue on Federalism series.

In 1988, Brazil adopted a new constitution that recognized municipalities as equal to the country’s 26 states and its one federal district, making Brazil the first country in Latin America to formally recognize local power. The South American country is now composed of more than 5,000 municipalities. Municipalities are responsible for the delivery of public services such as education, health care, housing, transportation and welfare.

Participants noted that national policy governing service-delivery has led to improvements. However, the effectiveness of local government implementation of what participants considered to be rigid policies is often hampered by a lack of capacity.

Metropolitan cities also have insufficient resources to provide services for their large populations as a result of fiscal policies that favour smaller municipalities in the distribution of federal revenues.

The event was organized by Marta Arretche, Associate Professor at the University of SÃ£o Paulo and Research Director of the Center for Metropolitan Studies and took place on June 25, 2009.