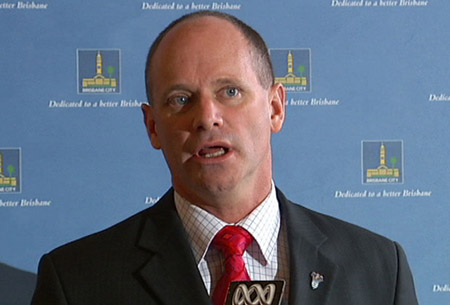 The lord mayor of Brisbane, Campbell Newman, underlines the unique model of cooperation between his government and the surrounding jurisdictions in South East Queensland, Australia’s fastest growing metropolitan region.

Experts from Australia, Canada and New Zealand gathered in Brisbane, Australia, from Aug. 19 – 21, 2010, to share their knowledge and insights in a colloquium on Metropolitan Governance in Commonwealth Countries.

The event was hosted by:
– the Council of Mayors, of which Campbell Newman, the lord mayor of Brisbane, is also the chair,
– the Local Government Association of Queensland,
– and the Brisbane City Council.

The Aug. 19 gathering was the beginning of a two-day roundtable. (This account summarizes the opening session.)

Stirling Hinchliffe, the Minister for Infrastructure and Planning for the state of Queensland, detailed the role played by state government in shaping and local and regional development in partnership with the SEQ Council of Mayors particularly as it relates to issues of coordinating strategic land use and major infrastructure initiatives.

Mr. Hinchliffe also noted that unlike other states in Australia, Queensland has several metropolitan areas, and this requires the state government to be sensitive towards issues of metropolitan government beyond its capital city.

The Forum of Federations in partnership with the Australian Centre for Excellence in Local Government provided comparative expertise on managing fragmented regions in other countries.

Rupak Chattopadhyay, the Vice-President of the Forum, emphasized the topical nature of present discussions on metropolitan governance the world over, noting that the rise of large urban agglomerations as drivers of demographic and economic growth greatly adds to the complexity of managing traditionally dualist (federal-state) federal systems.

He observed also that while the Australian and Canadian federations share many characteristics (two tiers of government as per their constitutions, highly urbanized, dualist commonwealth federations with increasing diversity brought on by immigration), including the fact that local government is a state-provincial responsibility, the relatively weak financial capacity of the Australian states has meant that there is far greater involvement in local and metropolitan issues by the federal order of government in Australia.

Consequently, the trajectory of planning and governance of metropolitan regions in Canada diverged greatly from the Australian experience, providing an opportunity to share experiences at the colloquium.

The Forum brought three expert speakers from Canada at the event: Rupak Chattopadhyay, Vice President of the Forumof Federations; Enid Slack, Director of the Munck Centre at the University of Toronto and Jim Ruznak, the Chief Financial Officer of Metro Vancouver.

Speaking about Toronto’s experience with fragmentation of the metropolitan region, Dr. Slack provided an evaluation of the city’s experience with amalgamation. She noted that the province of Ontario’s recent imposition of a regional development plan for the Golden Horseshoe region around the southwestern bank of Lake Ontario was an attempt to rectify the inherent limitations of an amalgamated City of Toronto.

Mr Ruznak presenting the case of Metro Vancouver noted a different and voluntary approach to regional coordination on service delivery and planning. Metro Vancouver is composed of 22 municipalities, one electoral area, and one treaty First Nation.

Not surprisingly, in addition to carrying out its core functions, Metro Vancouver serves as the main political forum for discussion of significant community issues at the regional level.

Peter McKinlay director of the Local Government Centre at Aukland University of Technology provided an overview of New Zeland’s recent move towards devolution at the national level through amalgamation at the local level.

Focusing upon the need to ensure that Auckland functions effectively as the powerhouse of the New Zealand economy and remains competitive with large cities around the world, Auckland Region will become a unitary authority controlled by the Auckland Council, replacing the existing regional council and seven local councils.

The Royal Commission in 2007 recommended the amalgamation as a response to economic under-performance by the metropolitan region brought on by administrative fragmentation.

The Region will be home to 35 percent of New Zealand’s population and will have significantly greater responsibility than other councils in the country, with a popularly elected executive mayor. The Mayor of the new Auckland region will represent many more constituents than any other politician in the country.

The final presentation was made by Gary White, Government Planner for the State of Queensland and Executive Director of Growth Management Queensland. Mr. White provided a detailed overview of the SEQ approach of coordinated planning and development and the role played by the State in reviewing and supporting metropolitan development in Queensland.

He noted that in comparison to the experience of metropolitan areas in other parts of the country, service delivery and infrastructure development and planning is relatively well coordinated in Queensland.

Somerset, Sunshine Coast and Toowoomba had made it much easier for the state to work closely with local governments in a sustainable and coordinated manner to deal with planning, infrastructure and development across the state.

The event was attended by Lord Mayors and CEOs from all local governments in the SEQ region, as well as John-Paul Langbroek, Leader of the Opposition in Queensland.

The central government, called the Commonwealth, was represented by Lucy Turnbull, Deputy Chair of the Council of the Australian Government Reform Council panel on Capital Cities and former Lord Mayor of Sydney; as well as representatives from the Major Cities Unit of Infrastructure Australia.