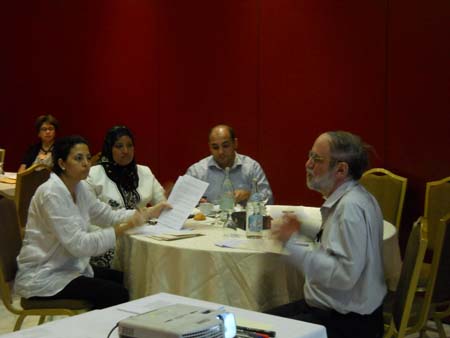 Members of the roundtable discussions in Tunisia – 6 and 7 September, 2012

In October 2011, in the advent of the popular uprising of the 2010 Arab Spring, Tunisia elected a Constituent Assembly to write a new constitution. Tunisian society is not fractured along ethnic or tribal lines which implies that ideology and the overcome of economical disparities and rising unemployment (especially among youth) are the main political issues. During the election campaign all political parties voiced the opinion that decentralization and devolution of power should play a crucial role in the country’s political future. Reversing regional inequities was the other major component of the political platforms during the elections. The peaceful nature of the transition in Tunisia has meant that the institutional capacity of the state has remained in good order. The administrative architecture through which power can be devolved already exists the country is currently subdivided into 24 governates which in turn are divided into 264 districts and the lowest order of government is the municipalities. There are however regional tensions between the rural and urban areas and between the rich coastal and the poor interior areas.

On September 6 and 7, 2012 the Forum organized a round table discussion in Tunis with the 25 members of the Constituent Assembly’s Commission for Regional and Public Collectivities to discuss the 13 articles of the constitution that pertain to devolution and decentralization. This activity is part of the Forum’s new project "Support to Constitutional Reform and Decentralization in Tunisia” which is funded by the Department of Foreign Affairs and International Trade, Government of Canada.

Three international experts participated in these roundtable discussions bringing to the table their own expertise and perspectives from other countries from which the Tunisian participants could benefit for their own work. The three experts were:

â€¢ Francois Vaillancourt, member of the Royal Society of Canada, a Fellow CIRANO and emeritus Professor of economic sciences at the University of Montreal;

â€¢ Balveer Arora, Chair, Centre for Multi-level Federalism at the Institute of Social Sciences, New Delhi and former Professor of Political Science and Rector at Jawaharlal Nehru University, and

â€¢ Daniel Kubler, Professor of Political Science and co-Director of the Centre for Democracy Studies, University of Zurich.

On Day One there were general discussions on the local powers chapter of the draft constitution, on state structuring and devolution of power in multi-level governance systems. Day Two focused on fiscal issues such as fiscal transfers, equalization and taxation as well as electoral models in decentralized systems. The experts also provided feedback on draft laws and participants appreciated hearing comparative examples from many other countries such as Canada, Switzerland, Germany, Kenya, India and South Africa.
The Political Counsellor at the Canadian Embassy in Tunis, Mr. Alexandre Bilodeau organized a reception on the Friday evening which was attended by the Minister for Regional Development and Planning, Mr Jamel-Eddine Gharbi; the President of the Commission for Local Collectivities, Imed Hammami, Member of the Constituent Assembly as well as the members of the Commission.