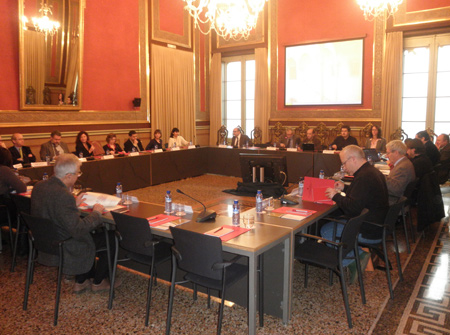 Participants at a Forum Global Dialogue roundtable in Barcelona discuss how to create an integrated political community in Spain.

A recent Forum roundtable on Political Parties, Civil Society and Decentralization in Spain brought together participants from diverse fields of experience.

The attendees were from academic, executive and representative institutions, as well as political parties and social organizations; and were from different orders of government and from different regions of Spain, known as autonomous communities.

The participants discussed problems that arose when political parties and civil society tried to work with Spain’s institutional framework, which is in the process of decentralizing.

The event, part of the Forum Global Dialogue series on political parties, took place February 19, 2010, in Barcelona. It was co-sponsored by the Institut d’Estudis AutonÃ²mics of the Generalitat de Catalunya and the Department of Political and Social Sciences of the Universtitat Pompeu Fabra of Barcelona.

The meeting was organized by Francesc PallarÃ©s, Javier Astudillo and TÃ nia Verge.

The debate was organized into two sessions. The first addressed the "external” expressions of Spain’s territorial pluralism, in which each autonomous community has a different relationship to the central government. This lopsided decentralization influences the way political demands and supports are expressed, organized and channelled through the political process. It affects how consensus is reached and conflict expressed. It also influences strategies of the various players on multiple levels.

One main issue participants addressed related to the difficulties in creating an integrated political community, which is really Spain’s "national question.” Another issue debated was the malfunctioning of the system as a result of the fact that no true upper house exists to represent the autonomous communities. There is also a power struggle in Spain today between demands for a re-centralization of powers against countervailing pressures for increased decentralization. Finally, participants examined the relationship between decentralization and the idea of Spain as a nation.

The second session focused on the expressions of territorial diversity in the internal life of the country’s political parties, civil society, advocates of the military and peace movement supporters in a Spain of different autonomous communities and different ways of making decisions.

Participants’ contributions dealt with specific cases of organizational adaptation to a decentralized institutional design. They dealt with the relationships between the autonomous community level and central level of the many different organizations.

They debated the "federal tension” between the pull toward unity and the push toward autonomy. Participants also examined the implications of the internal functioning of the political and social organizations with respect to the functionality of the system. One key question that was raised was whether centralized parties and organizations can accommodate themselves to a decentralized political process. There was no consensus on whether Spain needed a political culture of decentralization.