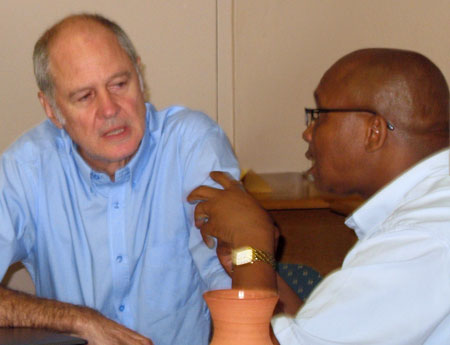 On the eve of South Africa’s fourth democratic May 6 presidential election, 26 South Africans from all three spheres of government, public sector institutions and civil society met in Cape Town to discuss the state of intergovernmental relations in the country.

Prof. Ben Turok, author and member of the African National Congress (ANC), gave the keynote address at the roundtable. He traced the evolution of ANC economic policy over the years and outlined the party’s proposal to establish a developmental state that would prioritize economic and social growth. Levels of poverty, unemployment and inequality in South Africa are among the highest in the world.

Participants noted that intergovernmental relations in South Africa have been subject to dramatic changes over the last few years.

The relationship between the different levels of government in the country is complex. There are four tiers of government – national, provincial, district and local and provincial and local governments rely heavily on federal funding. Participants debated whether further decentralization to local government is desirable given that resources are distributed unevenly at the provincial and local levels and a strong central government is necessary to ensure equity and growth. They were also interested to see how ANC reform proposals such as cabinet reforms, the creation of a developmental state and the introduction of a planning commission will affect intergovernmental relations.

While much progress has been made in the provision of social services, such as the introduction of social security grants, the central government has often been compelled to intervene in the social services of provinces and municipalities. The potential for intergovernmental relations to effectively address issues of poverty, unemployment and inequality was one of the most interesting topics of the meeting.

Intergovernmental relations are heavily influenced by politics, as the main political parties in South Africa operate in all spheres of government. The dominance of the ruling ANC party in parliament, the provinces and most municipalities means that most disputes are usually resolved through party structures not through cooperative intergovernmental relations. A political struggle for leadership of the ruling African National Congress led to the recall of the country’s president, the formation of a breakaway party and further challenges to cooperation between governments.

Participants agreed that further refinement of the intergovernmental relations system is needed, but there was a spectrum of opinion about what should be reformed and at what scale.

The event, which took place on March 3, 2009, was part of the Forum’s Global Dialogue on Federalism series and was co-organized by Derek Powell, independent governance consultant with the Community Law Centre.