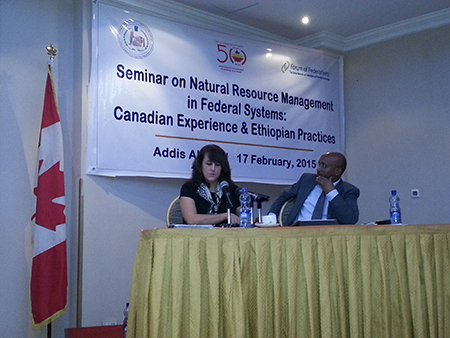 Opening presentation was made by Ms. Maureen Coulas from Natural Resources Canada

A one day seminar titled "Natural Resource Management in Federal Systems” was held in Addis Ababa Ethiopia, on February 17, 2015.

This program was co-organized by the Forum of Federations Ethiopia office, the House of Federation and the Canadian Embassy in Ethiopia. Forty-five participants attended representing various organizations from federal, regional and city governments, as well as academia. The main objective of the seminar was to share experiences between Canada and Ethiopia on natural resource governance systems from a federal perspective. 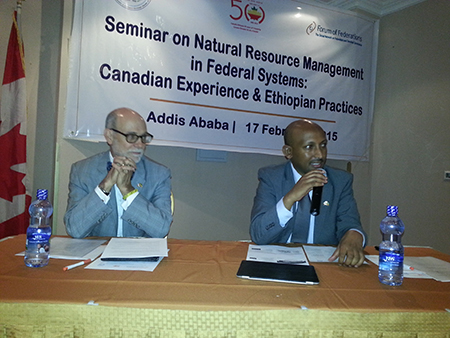 Mr. David Usher, Canadian Ambassador to Ethiopia, Djibouti and African Union, made an opening statement highlighting the purpose of the workshop and the usefulness of learning from Canada’s experience, both good and bad and that as "clever students” Ethiopia should take away only the good lessons and adapt them to the Ethiopian context. The Ambassador noted that this event was held on the occasion of commemorating the 50th anniversary of the establishment of formal diplomatic relations between Canada and Ethiopia.
Mr. Debebe Barud, Secretary General of House of Federation noted that the seminar was very timely given that it is a high priority of the Government of Ethiopia to improve the management and use of natural resources of the country to fuel development and growth. Mr. Maeregu Habtemariam, East Africa Program Director of the Forum, suggested that the seminar could serve to inform policy in Ethiopia and even become a starting point for formulating a longer-term program aimed at improving the natural resource governance of federal Ethiopia. 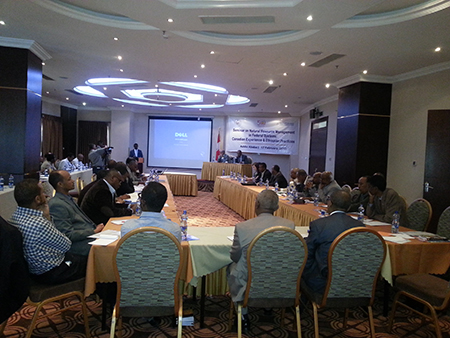 The opening presentation was delivered by Ms. Maureen Coulas from Natural Resources Canada. She elaborated on the natural resource management of Canada from historical, legal, economic and social perspectives. She explained the role of communities in natural resources governance and explained that Canada’s approach is based on sustainable development, transparency and accountability within a defined legal framework that delineates the federal, provincial and territorial responsibilities.

Dr. Geberehiwot Tesfai from Addis Ababa University presented the Ethiopian practices and legal frameworks, and Dr. Mehari Tedele served as facilitator (moderator) of the seminar. Dr Gebrehiwot outlined that the concurrent assignment of natural resource taxes to the States and the Federal government in Ethiopia has both political and economic rationales. In terms of politics, guaranteeing the States’ right to benefit from their natural resources is believed to help holding together the constituent members of the federation. The economic rationale aims to address the problem of politically unacceptable horizontal socioeconomic and fiscal disparity. Dr. Gebrehiwot also described his concern related to the decisions of the House of Federations on the distribution of proceeds generated from the concurrent sources of revenue between Federal and State governments. 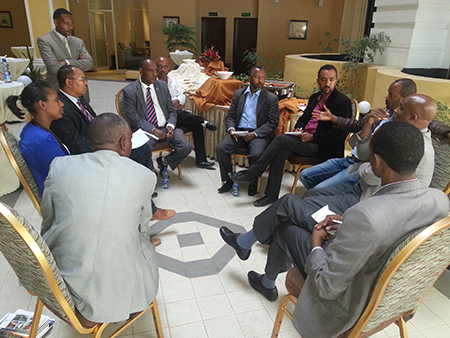 During the day’s deliberations the participants were actively engaged in the discussions. Some of the issues raised were provocative, such as the question whether natural resources were going to be a curse, as they have been elsewhere in Africa, or a blessing for the future of Ethiopia.

The program was financed by the Canadian Embassy in Ethiopia with a contribution from the House of Federation of Ethiopia.