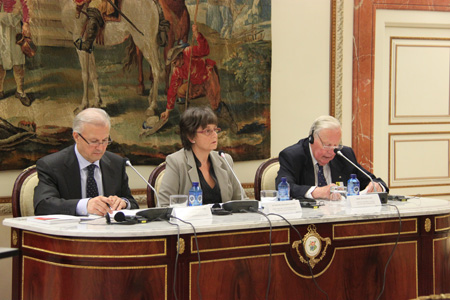 In Madrid, Francisco Pina Cuenca, President of the regional legislature of Aragon (the Cortes of Aragon) at left, participates in seminar on territorial pluralism. To his left are Paloma Biglino Campos, director of the centre for political and constitutional studies (Centro de Estudios PolÃ­ticos y Constitucionales), Madrid, and Prof. Ronald Watts of Queen’s University, Canada.

Territorial pluralism a system that allows for regional differences within a country is the norm in Spain, where, quite naturally, the Catalan and Basque languages are spoken more often in Catalonia and the Basque Country than is Spanish.

Creating space for regional differences is also the norm in other Federal countries such as Switzerland, Canada, India and Ethiopia, which have states or provinces with different languages, religions or ethnic populations.

To better understand what is needed for such a system to succeed, the Forum co-organized a conference in Madrid on Guarantees of Territorial Pluralism held June 14 15, 2010. The Forum’s partner organizations in arranging the event were the Centre for Political and Constitutional Studies (CEPC) and the Manuel Gimenez Abad Foundation for the Study of Parliaments and Autonomous Status.

Some speakers at the seminar said that certain federal countries broaden the powers of the central government in order for it to play a role in strengthening the country’s territorial pluralism. This is usually accomplished by expanding the federal government’s regulatory powers, its implicit powers or, as in Canada, the federal spending power.

However, the reaction by those who oppose this regional strengthening of powers is to turn to the courts for a judicial ruling on contested competences, and this can then lead to constitutional reform that gives wording and meaning to the expanded regional powers.

To resolve federal disputes, most federations rely on their high courts. In common law federations such as Australia, Canada and the United States, it is usually the Supreme Court that rules on such matters; and in civil law federations, it is the Constitutional Court.

Professor Ronald Watts of Queen’s University in Canada, one of the world’s foremost authorities on federalism, noted that with regard to ensuring that territorial pluralism measures take root in a given country, it is necessary to distinguish between constitutional and political guarantees. Prof. Watts said there are two fundamental preconditions for these guarantees to work:

The organizers will publish the papers that were presented at the seminar.

The Forum arranged for the following experts to participate in the seminar: