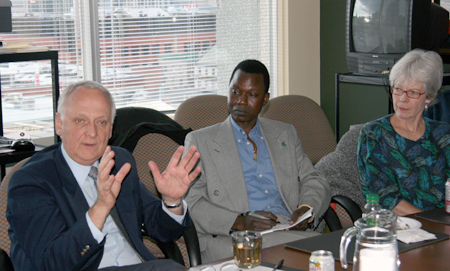 Prof. Nic Olivier, left, explains the new role of traditional government in South Africa. To his left are Justin Lako of the NGO, Friends of Sudan; and Gail Motsi, of the Ottawa-based Institute of Governance.

South Africa’s traditional local governments have been assigned a formal role in the political system after many years of neglect by the central government.

The role of the traditional governments was recently explained by Professor Nic Olivier, of the Centre for Land-Related, Regional and Development Law Policy of the University of Pretoria, South Africa.

Prof. Olivier described the changes to a gathering of diplomats, civil society representatives and Forum staff members at a Lunch and Learn function at the Ottawa headquarters of the Forum of Federations.

However, gradually, when there was a need for service delivery that local governments could not meet, methods were created to introduce democracy and diversity into local traditional governments and the South African national government began to give more responsibilities to them.

On Dec. 1, 2009, a new national Department of Traditional Affairs was created to co-ordinate policy initiatives with the provinces, local municipalities and the national government.

"As of Dec. 1, 2009, a new National Department of Traditional Affairs in South Africa now co-ordinates all policy initiatives with the provinces, cities and the national government,” Prof. Olivier told the participants.

South Africa today consists of 800 traditional African communities, which make up between 15 and 20 million people. They live in areas formerly known as "homelands” or Bantustans. While they occupy about 13 per cent of the country’s surface area, they comprised between 60 to 70 per cent of South Africa’s population until about 15 years ago.

"If a local chief was unwilling to obey orders, his letter of appointment was withdrawn,” Olivier explained. "This was the case all over Africa, from the Cape to South Sudan.”

As of 1948 the Apartheid government in South Africa simply intensified this system.

But now, traditional government has been recognized as a system that can help bolster the capacity of rural government, especially at the local level, providing services ranging from registering births and deaths to local policing. These governments all collaborate with the provincial levels of government.

"A process of communal (land) tenure reform has begun that is of interest to South Sudan, Zimbabwe and other African governments and possibly also to Canada,” Olivier added.