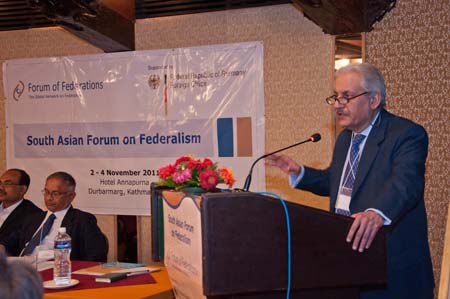 Above Senator Raza Rabbani speaks during the Forum of Federations forum on Federalism in Nepal. Which was held at Hotel de l’ Annapurna,
Durbar Marg, Katmandu, Nepal

The conference was co-funded by the German funded Pakistan project "Strengthening Federalism in Pakistan” and the Forum of Federations core resources.

This regional conference came about at a very crucial time especially for Nepal and Pakistan when Nepal is undergoing a major transition towards introducing a system of democratic and federal governance and for Pakistan when it is undergoing devolution of autonomy after the historic 18th Constitutional Amendment in 2010. The objective of this regional event was to bring together regional as well as international federalism experts and practitioners to discuss regional comparative experiences and look at international best practices on issues such as the challenges of Creating a New Federation and determining the basis upon which to establish the constituent units. Political Dimensions of Intergovernmental Relations, Political Parties in Federal Systems and Fiscal Federalism: examining the economic decision making in federal systems of government. 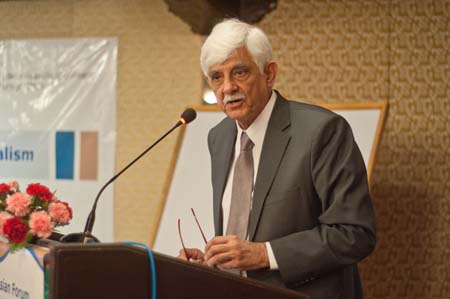 Prof. Bal Krishna Mabuhang, Senator Raza Rabbani and Dr Jana Barshankanti presented the case studies of Nepal, Pakistan and India. Prof Mabuhang explained that the major challenges the Nepalese Constitutional Assembly (CA) faces in opting to federalism is that as Nepal is a multi cultural, ethnic, religious society comprising of various nationalities and indigenous groups, the CA’s task is to protect the rights of the minority and of different indigenous groups and nationalities. Fourteen different federal units are proposed before the State Restructuring and Division of Power (SRDP) in CA and they have to decide keeping in view issues of identity, capability, ethnicity, community, linguistic, cultural, and historical continuity, and capability, issues of economic inter-dependence, economic capability, status of infrastructures and their viability, availability of natural resources and administrative accessibility in these units.

Senator Mian Raza Rabbani one of the main authors of the 18th Constitutional Amendment in Pakistan said creation of constituent units in federal countries is a historical process. Units should not be carved out on the basis of administrative convenience as it will aggravate the national, ethnic, linguistic and natural resource questions. He said countries are not produced in a factory; rather they evolve through a political process. The political, economic and cultural issues that dominate the movement for the creation of state will find expression in the constitutional dispensation. New constituent units would require political thought process and national dialogue involving issues like the impact and implication of consequential constitutional amendments, fiscal viability of new units, creation of administrative infrastructure and distribution of natural resources.

Jana Barshankanti highlighting the case of "Reorganizing Constituent Units In A Federal Democracy: An Indian Perspective” said that States Reorganisation Commission [SRC](1955-56) had examined all related issues bearing on reorganization of states. These included: the cost of change; unity and security of India; language and culture; financial viability; requirements of national development plans; regional planning and a balanced economy; smaller vs larger states and some other relevant areas of importance, such as, a) the wishes of the people or public sentiment; b) historical factors; c) geographical factors and d) administrative considerations (governance in today’s context). SRC emphasized the importance of language as a key factor. Thus the objective was conceptualization of linguistically homogenous units while at the same time laying emphasis on balancing the linguistic principle with other equally important factors. 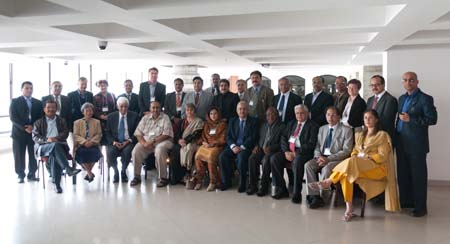 The group that was part of the South Asia forum on Federalism in Nepal, 2-4 November 2011 Hotel de l’ Annapurna,
Durbar Marg, Katmandu, Nepal

Country case studies and presentation were made by Allan Fenna (Australia), Isawa Elaigwu (Nigeria), Christian Brecht (Germany), Dassa Bulcha (Ethiopia), Syed Jaffar Ahmed ( Pakistan) and Rakesh Hooja, (India). Each looked at the political dimensions of intergovernmental relations in their own country and gave an overview of the relationship and interactions between the two orders of government (i.e., federal and regional).

Rupak Chattopadhyay in his presentation "Political Parties and Civil Society Organizations In the Federal Democratic process in India” said that the multi-verse of Indian democracy is truly reflected in the working of political parties and civil society organizations and the nature of challenges that they face in the Indian federal political system. Zaffarullah Khan’s presentation, Political Parties in Federal Systems: A case study of Pakistan, said that 2011 for Pakistan’s political parties it is time to wake up, where the New Pakistan is in making understand it, grasp the opportunity and contribute to realize it. Countries are not carved on stone; rather they are organic and dynamic. There is always a space to reform and respond to new challenges. Nicole Topperwien shedding light on the Political Party System in Switzerland said that the working of government and parliament keeps parties together through relative independence decreases reasons to go and form an own party (for individuals and party branches).

On the third and the last day a comparative experience on fiscal federalism were shared, Prof Wolfgang Renzsch presented a detailed case study of the German tax and revenue system and how different tasks are diveded between the federal goverment and the landers. Ms Wee Chong Hui explaining the Malaysian Fiscal Federalism said that, Malaysia is a centralized federation with revenue assignment favoring the Federal Government. Federal jurisdictions can adversely affect state government revenue, especially federal powers over businesses & exports for the open economy.VN Alok presenting the Indian case said that the tax power and the expenditure responsibilities of the centre and state are specified in the constitution in terms of centre, state and concurrent list. With the amendment to the constitution in 1992, the local governments in rural and urban areas too have been accorded constitutional recognition.

All together forty two participants from eleven countries participated in this three day event. Everyone concluded that the exchange of experience provided by this kind of forum was very instructive and the networking opportunities were useful for continued dialogue, sharing of best practices and partnerships within the region