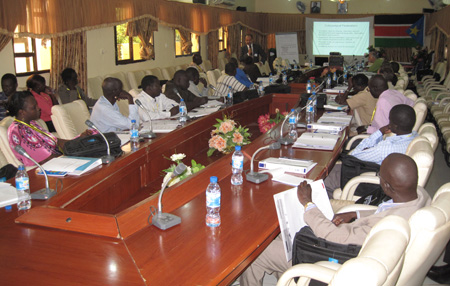 As Sudan’s Comprehensive Peace Agreement enters it waning months, Sudanese political leaders are increasingly turning their sights to preparing for the future.

In January 2011, southern Sudanese will go to the polls to vote on a referendum on self determination, which will mark the end of the 2005 peace agreement transition period and result in a decision on whether Southern Sudan is to secede from the north or remain united in a single nation.

Whatever the outcome, it is widely acknowledged among practitioners and observers that wealth and power sharing arrangements will have to continue playing a central role in sustaining peace, stability, and development in southern Sudan.

With regard to wealth-sharing, which primarily involves sharing income from Sudan’s oil and gas resources, the Forum held a recent training on Designing Effective Intergovernmental Transfers funded by Canada’s Department of Foreign Affairs and International Trade.

The learning event was delivered in collaboration with the Southern Sudan Fiscal, Financial and Allocation Commission.

The event is part of the Forum’s fiscal federalism training program that seeks to build a stronger constituency for improved management and oversight for implementing effective fiscal institutions.

The sessions focused on fiscal inequalities between central governments and constituent units, and assisted finance leaders as they are developing common strategies towards achieving a more equitable transfer formula from the central government to the states.

Another objective of the function was to examine comparative tools and techniques in designing intergovernmental transfer systems, as well as to discuss practical challenges with respect to sound transfer implementation.

The training, which was held on June 28-30, 2010, built on a three-day foundations course held earlier this year. It brought together a senior group of representatives from the Ministry of Finance and Economic Planning, the Southern Sudan Fiscal Commission, State Ministry of Finance Ministers and Directors’ General; the auditor general’s department and other key fiscal and international development professionals.

Two international experts assisted in the training sessions. They were Mr. David Solomon, a local government finance expert and public finance economist at Wits University in Johannesburg, South Africa and consultant to the South African Financial and Fiscal Commission; and Mr. VN Alok, a professor of public finance and Chairman of the Centre for Economic Analysis and Financial Management at the Indian Institute of Public Administration, New Delhi, India.

The objective of the Forum’s two-year Federal Governance and Peace program in Sudan is to strengthen capacities to implement key federal components of the 2005 Sudan peace agreement and build the basis for a broader and deeper national understanding about and commitment to the role of federalism for sustainable peace in Sudan.