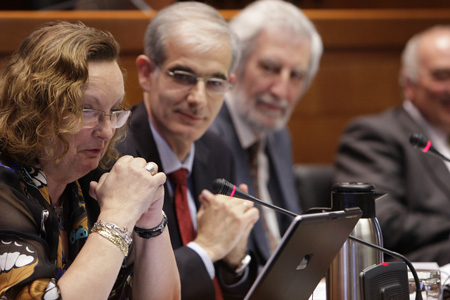 The Forum and three local partners in Spain recently held a one-day seminar titled Decentralization of Health Care in Federations: Recent Trends and Lessons from Spain.

The event was co-organized with the Manuel Gimenez Abad Foundation for the Study of Parliaments and Autonomous status, in collaboration with the Legislature of the Autonomous Community of AragÃ³n, called the Cortes of AragÃ³n.

In the past 20 years, Spain has delegated the responsibilities for managing many nationwide programs to its 17 regions, known as Autonomous Communities.

Following that a series of reforms were passed in 2002 granting the authority to all of Spain’s 17 Autonomous Communities to run their respective health care systems. Both the funding of the system, and the universal standard of care requirements, remain under the authority of the central government in Madrid.

Now, after almost 25 years of decentralization, seminar participants discussed the advantages of the decentralized system, analyzed its performance and debated what further changes should be made to it.

Participants said that decentralization has brought about many positive outcomes including increased efficiency of the system, a decrease in disparities in health care among the Autonomous Communities, and the system’s economic sustainability, which is weathering the economic crisis that has hit Spain hard.

Despite the improvements the system still faces challenges. For example, in 2002, the central government assigned the responsibility of statistics collection to the Autonomous Communities. This has left Spain without a central data source, making accurate performance comparisons impossible between regions. This has led to inefficiencies in the system.

Delegates were in general agreement that Madrid needs to take on a co-ordinating role to ensure equality of care throughout the country, and that waste and overlap are minimized. Others suggested the need to revise the system’s legal and fiscal framework and increase citizen participation.

Professor John Kincaid, of Pennsylvania’s Lafayette College, and Prof. FranÃ§ois Vaillancourt of the UniversitÃ© de MontrÃ©al, presented on the experiences of Canada and the United States and discussed differences and similarities to the Spanish system. The spiraling cost of national healthcare is a significant and common concern in all the three countries.