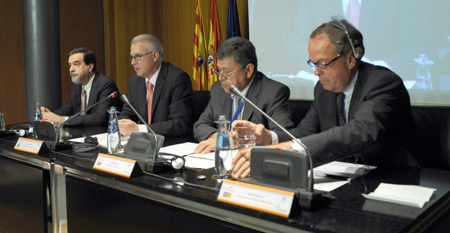 Participating at the international conference on water management in Zaragoza, Spain, are (from right), Forum President George Anderson; Eduardo Mestre, Director of the Water Tribune at Expo Zaragoza 2008; Francisco Pina Cuenca, President of the Regional Parliament of Aragon; and Antonio Embid Irujo, Professor of Administrative Law, University of Zaragoza.

To cope with water shortages, climate change and resultant drought or flooding, federal countries face special challenges because in most federations different orders of government are responsible for different aspects of a country’s overall stewardship of this vital resource.

To address these issues, the Forum of Federations recently co-organized an event in Zaragoza, Spain, titled International Conference on Water Management in federal and Federal-Type Countries.

Management of water in federal or politically decentralized countries must be co-ordinated between that country’s central government and its sub-national units their provinces, states cantons or LÃ¤nder especially to ensure the continued health of their river basins.

The focus of the conference was the intergovernmental dimension of water management. The participants learned about how water is managed in different politically decentralized countries. Reports were presented by experts and academics from Argentina, Australia, Brazil, Canada, Ethiopia, Germany, India, Italy, Nigeria, South Africa, Spain, and the United States. The wide variety of case studies offered detailed analysis of both co-ordination and conflict between countries’ internal orders of government over water, including the forces driving conflicts and resolution among different jurisdictions.

In addition, the notion of so-called "community water rights” was cited as an example of a water management technique that has had near universal success.

The discussions showed that in all federal countries and federal-type systems, effective development and implementation of water policies requires co-ordination among all levels of government, administrative commissions, and independent agencies.

The event was held from July 7-9, 2008. It was part of EXPO Zaragoza 2008, under the broader theme of Water for Sustainable Development. The Spanish exposition, which is running from June 14 Sept. 14, is expected to attract about 6 million visitors.