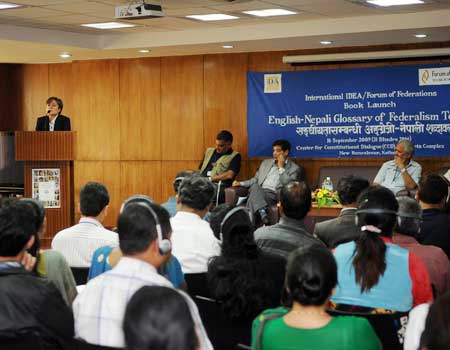 Dr. Nicole Topperwien, a Swiss federalism expert, addresses the audience at the launch of the Forum’s Nepal-English glossary of federalism terms.

As interest in federalism heightens in some quarters of the world, people are debating everything from the models of federalism to the definitions of terms underpinning this form of governance. In this vein, the Forum of Federations recently released a Nepali-English glossary of federalism-related terms at the Centre for Constitutional Dialogue in Kathmandu.

The publication was developed by a team of Nepali and international experts and is intended to serve as a resource for politicians, journalists and academics by establishing a common ground for discussion. It is hoped that the use of standard definitions will reduce conflict and serve as the foundation for constructive dialogue on issues that are often quite technical and complex.

The book launch featured a panel discussion headed by the prominent Nepali journalist, Mr. C.K. Lal, who contributed to the drafting of the glossary, and fiscal experts Dr. Shankar Sharma, Dr. Nicole Topperwien, Purna Man Shakya and Professor Gunanidhi Sharma. The panellists highlighted the importance of the glossary and fielded questions from more than 50 attendees.

Nilambar Acharya unveiled the glossary. A member of the Constituent Assembly, he was recently appointed Chair of the Constitutional Committee and is charged with preparing the final draft of the country’s new constitution. Mr. Acharya noted the importance of an informed debate on federalism and welcomed the publication of the glossary. He also thanked the Forum and International IDEA, which supported the project, for this contribution to Nepal’s transition to peace and federalism.