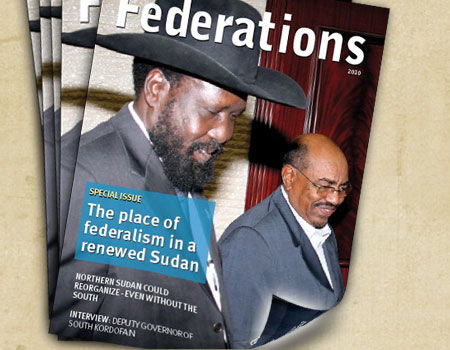 The Forum of Federations has published a Special Sudan Issue of Federations Magazine. The cover shows Sudanese President Omar al-Bashir (right) as he welcomes Salva Kiir, who heads Sudan’s former rebel Sudan People’s Liberation Movement, as Sudan’s First Vice President at a swearing-in ceremony in Khartoum on May 29, 2010.

The Forum of Federations has published a 64-page special Arabic-English issue of Federations magazine to be distributed in Sudan prior to the 2011 referendum on the future of South Sudan.

The special issue is meant to explain what is at stake in the referendum, and what the likely consequences are in the event that South Sudan chooses to separate and become an autonomous country or remain an integral part of Sudan.

The referendum is scheduled for January 2011.

While most of the articles were written by Africans, from Sudan, Ethiopia and South Africa, some were penned by Forum staff or its subject matter experts, people who have come to know and understand the complexities of this fascinating but potentially explosive and recently war-torn country.

What emerges from the articles is that even if the South Sudanese vote for separation, it is possible that the new nation will become a federation; as it is also possible that Northern Sudan could also chose to be federal.

Many of the articles were written in English and translated into Arabic, while the rest were translated into English from Arabic. The issue is edited by the magazine’s senior editor, Rod Macdonell; and its associate editor, and Carl Stieren.

The content was designed by Shawn Houlihan, the Forum’s Africa director. Mr. Houlihan said of the magazine that its purpose "is not to advocate for federalism or a particular brand of federalism. It is to provide a neutral and authoritative contribution to the debate and to inform the public about federal ideas and the accompanying challenges in Sudan.”

The special issue was produced as part of the Forum’s two-year governance program in Sudan, which was funded by the Canadian Department of Foreign Affairs and International Trade.

View the PDF of the Special Sudan Issue.