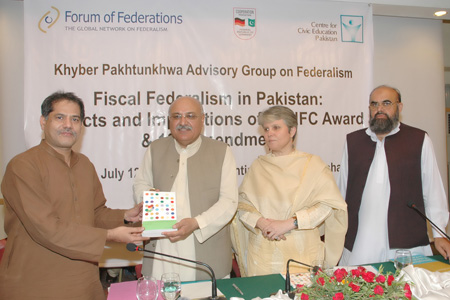 Pakistani officials use Forum publications to inform discussions on the impact of recent amendments to the country’s constitution.

More than 70 people including elected officials, civil servants, academics, journalists and activists from different political parties gathered recently in Peshawar to learn and discuss how major revisions to the country’s constitution will affect Pakistan’s federal system and the lives of its citizens.

Peshawar is the capital of Khyber-Pakhtunkhwa province. The province was formerly known as North-West Frontier Province.

This event, a meeting of the Policy Advisory Group, was one in a series of provincial advisory group sessions, held to assess the effects of the country’s recent constitutional changes and inform citizens about the political implications of Pakistan’s constitutional reform process. The first meeting was took place in March 2010.

The Peshawar event was held by the Forum and the Center for Civic Education Pakistan. It centred on the economic challenges Pakistan is facing in light of 18th Amendment, the constitutional modification which is credited with restoring democracy to Pakistan and reviving its federal system of governance.

The amendment also gives new powers of administrative and financial autonomy to the provinces. It will take effect in July 2011. The amendment, which was passed April 2010, restored most of the 1973 constitution, with one major change: it abolished the so-called "concurrent list of powers” shared by the central government and the provinces.

In a keynote speech, Dr Jehan Z. Manan of the Institute of Management Sciences in Peshawar, explained the role of the different orders of government as service providers. He described how that role is allocated to the central government and the provinces, and how different services are provided by the governments of different geographic entities.

Dr Manan highlighted how the limited revenue-raising capacity of the provinces, added to their increased responsibilities, creates a problem called "vertical fiscal imbalance.” The gap between revenue and expenditure is then filled by revenue sharing, primarily by way of intergovernmental transfers to the provinces from the central government.

The day’s speakers and panel chairs included Liaqat Ali Shabab, the excise minister; Ms Bushar Gohar, member of the National Assembly and honorary member of the Constitutional Reform Commission; and Mr. Nurul Haq of the Oil and Gas Regulatory Authority in Islamabad.

Mian Iftikhar Hussain, the information minister, explained in detail the state of preparedness of the provincial government to implement the 18th Amendment and allocate the funds to be transferred to the province by the National Finance Commission.

The Forum’s Pakistan project is funded by the Government of Germany. It commenced in August 2009 and will continue until the end of 2011.