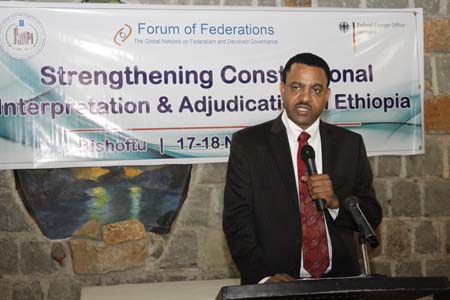 The workshop was opened by the speaker of the HoF, H.E Kassa Tekleberhan (above)

Two workshops on "Strengthening Constitutional Interpretation and Adjudication in Ethiopia” were recently held in Bishoftu (November 17 18, 2012) and Hawasa (December 19-21, 2012).

The two programs, organized by the Forum and Ethiopia’s House of Federation (HoF), the upper chamber of the federal legislature, drew 52 participants, among them ministers, senior government officials, policy makers, federal and regional Supreme Court judges, members of the CCI, and standing committee members of the two houses who play key roles in Constitutional Interpretation (CI).

The first event took place in Bishoftu from Nov 17-18, 2012 with 25 participants which included the relevant senior officials mentioned above. The workshop was opened by the speaker of the HoF, H.E Kassa Tekleberhan, who described the mandate of the HoF, the current activities undertaken by the House, the objectives of the workshop, and the role of distinguished international experts and participants. The speaker mentioned that constitutional interpretation and adjudication is one of the mandates of the House that promotes democratic constitutionalism in the country. As Ethiopia’s model of constitutional interpretation is unique in its own context, said the speaker, it is necessary to tackle its unique challenges by learning from others and adapting the knowledge to the Ethiopian context. He also emphasized that unless constitutional interpretation is taken properly, the constitutional system could be threatened. Accordingly, he underscored the relevance of the workshop in assisting the HoF in its commitment of building capacity of the CCI, HoF Committees, and strengthening institutional set up, working principles and procedures. 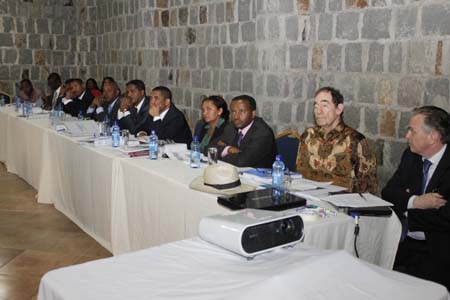 Some of the participants during the two 5-day workshops
The second workshop was held in Hawassa (capital of the Southern Region) from 19-21 December, 2012 and a total of 27 senior officials participated in it. The participants were from both federal and state legislatures, the House of Federation, House of People Representatives, speakers of regional parliaments, members of CCI of both federal and regional governments and other relevant senior officials.

The workshop was opened by H.E. Shiferaw Shigute, President of the Southern Nation, Nationalities and Peoples Regional State. In his opening remarks, H.E Shiferaw stressed the importance of the program for constitutional development in general and for strengthening of constitutional interpretation in particular both at federal and regional level which allows citizens to exercise their right in democratic governance and development. He also underlined that the workshop was a good opportunity to learn from the international experience when addressing the challenges that Ethiopia encounters given that the country’s federal governances and constitutional interpretations system are relatively young and have their own unique features.

The workshops were also attended by Prof. Andreas Eshete, Minister and special advisor to the office of the prime minister, and by Mr. Shaun Houlihan, Forum’s senior director for Africa. In his welcoming address, Mr. Houlihan briefly explained the importance of the workshop for constitutional interpretation in Ethiopia and the major activities of the Forum. He also mentioned that the Forum’s collaboration with the government of Ethiopia has shown growth during the 5th International Conference on Federalism held in 2010, and mentioned his recent meeting with Prime Minister Hailemariam Desalegn. He also reiterated the Forum’s mandate and commitment to strengthen federalism in Ethiopia and the excellent partnership it enjoys with the government of Ethiopia and the House of Federation in particular. Mr. Maeregu Habtemariam, program Director of Forum’s Ethiopia office, introduced the current and future activities of the Forum, general and specific objectives of the workshop, agenda and expected outcomes.

The workshops were conducted as part of the Forum’s Ethiopia program in partnership with the Ethiopian House of Federation Towards Federal Development in Ethiopia with the financial support from the German Foreign Office.