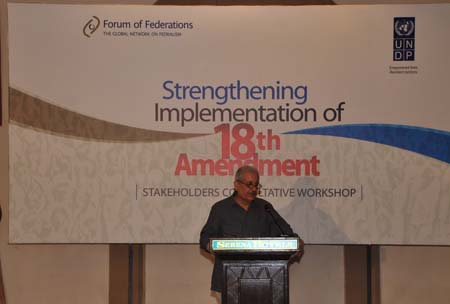 The Forum and the United Nations Development Programme (UNDP) jointly organized a half day National Roundtable Consultation Workshop "Strengthening Implementation of the 18th Amendment” held on 25 July, 2012 in Islamabad. This was the last of a series of five workshops, the four previous workshops being held in the four provincial capitals. These workshops were aimed to address the challenges and opportunities emerging against the backdrop of redefined relationships between various tires of governance. The consultative workshops intended to seek the feedback of provincial and national stakeholders on some of the critical issues emerging from post implementation of the 18th Constitutional Amendment. It is expected that the consultative workshop will help develop a shared understanding of issues discussed, and help to formulate a joint/common set of recommendations/suggestions as well as identify areas of support where UNDP and the Forum can offer their support to strengthen the provincial capacities in transition management post 18th Amendment. 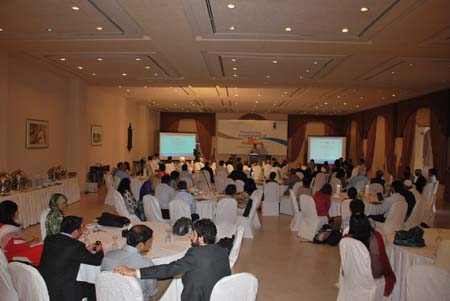 Toshihiro Tanaka, Country Director, UNDP welcomed the participants and shed light on various initiatives taken by the UNDP to assist Pakistan in development and governance, and stressed that UNDP is keen to support and strengthen the provincial capacities in transition management post 18th Amendment.

Tusihta Pilapitiya, Policy Advisor, Regional Bureau, UNDP shared the current situation on participatory federalism followed by a discussion on the challenges and opportunities in each province.

Zafar Ullah Khan shared a brief report on the discussion and recommendations from the provincial consultations and emphasized that there was an aggregated provincial effort launched to implement the 18th Amendment. At provincial level there was an acceptance of "democratic devolution”, but there were complaints about incomplete devolution. In terms of challenges the provincial stakeholders said that the devolution brought forth a big challenge without necessary preparation and increased responsibilities with existing resources.

Chief guest of the event, Senator Raza Rabbani who was the Chairman, Parliamentary Committee on Constitutional Reforms which drafted the 18th & 19th Constitutional Amendments and Chairman of the Implementation Commission and is a member of the Board of the Forum of Federations from Pakistan said in his key note address that the 18th Amendment has changed the paradigm of Pakistani federalism. He mentioned that in the past the civil military bureaucracy took it upon themselves that all decisions should emanate from Islamabad or Karachi (when Karachi was the capital). And everyone, be it a politician, representative of academia or civil society who spoke or raised a voice about political rights or provincial autonomy was considered to be traitor and seen as a person working against the federation. The concept was that a strong federation with all powers usurped by the federal government was the only guarantee for a strong Pakistan. The 18th Amendment changed this paradigm as the Amendment believes that strong federating units are a guarantee of a strong federal government, that a viable federation whose federating units are in command and control of the management and of their natural resources will synthesize a new culture, a Pakistani culture.

Senator Raza Rabbani also mentioned that there were and there are certain forces at work which do not want the devolutionary process to succeed. These are those forces that are not willing to accept the shift in the paradigm after the 18th Amendment.

Federal Secretary for the Ministry of Inter Provincial Coordination (IPC) Anis Ul Hasnain Mousavi also spoke on behalf of the minister for IPC and congratulated the UNDP and the Forum on arranging the National Consultation and for inviting the IPC ministry to be a part of this process. He extended his ministry cooperation in this regard. He said that it was indeed most appropriate trying to find ways and means of strengthening implementation of the 18th Amendment. 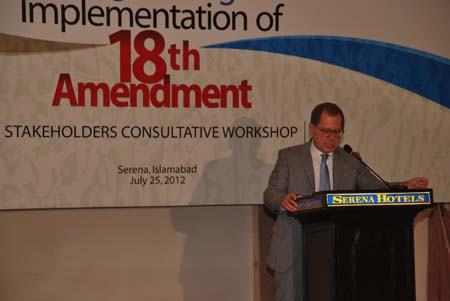 Dr. Leslie Seidle, Senior Advisor and Consultant, Forum of Federations provided a brief overview of the global experience on federalism and a comparison of Pakistani federalism with international best practice. He said that as an outside observer he could not fail to be impressed by the scale of the changes provided for in the 18th Amendment to Pakistan’s Constitution. 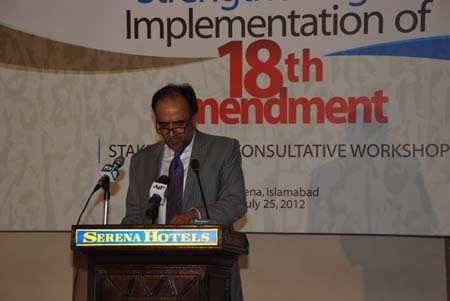 He stressed that what is sometimes referred to as the â€˜watertight compartments’ vision of federalism does not accord with contemporary realities. Policy fields such as economic development and environmental protection, to name only two, cannot be assigned to only one order of government. Federal countries, even those (such as Switzerland) that have attempted to define in considerable detail the different governments’ responsibilities, are faced with policy and even program interdependence. Managing this interdependence is central to day-to-day governance in federal systems, and intergovernmental institutions and processes often make an important contribution to policy coordination.
Qamar Zaman Kaira, Federal Minister for Information said in his concluding remarks that he speaks with a sense of fulfillment on landmark 18th Constitutional Amendment, and congratulated UNDP and the Forum for launching a dedicated program on strengthening the process of implementation of this historic achievement.

He further said that the 18th Amendment has, indeed, brought about comprehensive structural changes to guide and redefine the nature of governance in Pakistan. It has not only revived but also re-oriented radically the democratic and federalist fundamentals of the State of Pakistan. Prior to the 18th Amendment a consensuses NFC Award was achieved in 2009. A recent study based on the Fiscal Equalization Indicators (FEI) has established that: "the largest improvement in the index has been made with the 2009 NFC award, which has introduced an element of fiscal equalization for the first time in divisible pool transfers.” The 7th NFC Award and the 18th Amendment have addressed basic distortions in the fiscal, political and legislative domains.

However, after about two years of the introduction of the 18th Amendment, the process of transition management of devolution ushered in by this Amendment is passing through teething problems. There are two key challenges in the implementation of 18th Amendment at federal and provincial levels: First, internalization of the intent of the Amendment and second, institutionalization of the changes in governance. Currently, provinces are faced with challenges of visioning, policy planning and strategizing the devolved functions and subjects. Therefore, it is imperative that decision-making support systems are developed at federal and provincial level to optimize the dividends of the 18th Amendment.

He further said that he would take this opportunity to appreciate UNDP and the Forum in launching this thematic program. And that he strongly hopes that global, national, provincial and local development sectors would come together, join their hands and strengthen the process of democratic devolution in Pakistan.